Last night, guests at our “Little Mermaid Meet-up” got to see some stories from the Disney Parks Blog come to life, with a rare opportunity to meet Walt Disney Imagineers and Walt Disney animators. They also got to hear some fascinating stories about the attraction that opens June 3 at Disney California Adventure park: The Little Mermaid ~ Ariel’s Undersea Adventure.

This was the star line-up for our panel discussion: Walt Disney Imagineers Lisa Girolami, Larry Nikolai and Chris Crump from the attraction’s creative team, plus Walt Disney animators Andreas Deja and Mark Henn, who worked on the animated feature film on which the attraction is based. Tim O’Day, a Disney author and historian, served as emcee.

The panelists told us the attraction took nearly four years to create, from concept to finish. Larry revealed that the “Under the Sea” scene has more than 128 characters, “if you count the 50 starfish.” And though it has been “a lot of work,” they also said they’ve had a lot of fun. 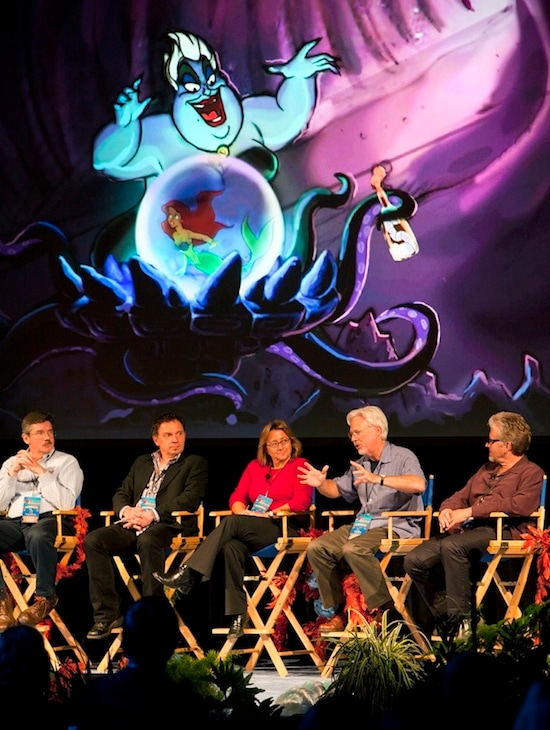 After an exciting presentation, with behind-the-scenes video and photographs, the panelists answered guest questions. One question came from Fred, a regular Blog reader: “What was one of the most exciting parts of creating this attraction?”

Chris Crump answered by telling a story about the Ursula character, who stands 12 feet tall and 7.5 feet wide. The team created her at the Imagineering offices, and then moved her into the attraction, calculating carefully to fit her into the allotted space. It was a tight squeeze. “When the hatch opened, I was just looking at her tentacles, hoping … and the tentacles cleared the hatch by about an inch,” Chris said, very relieved.

Our guests mingled with the Disney panelists and enjoyed some fabulous appetizers before the show began in a ballroom at Disney’s Grand Californian Hotel & Spa. Guests also got a few autographs signed on their special gift – a beautiful lithograph featuring a portion of the mural that will be inside The Little Mermaid attraction queue line.

The guests – big fans of the Disney Parks Blog – got to meet some of our authors, Erin Glover and Jim Ames. And they took photos with Ariel, the star of the new attraction. 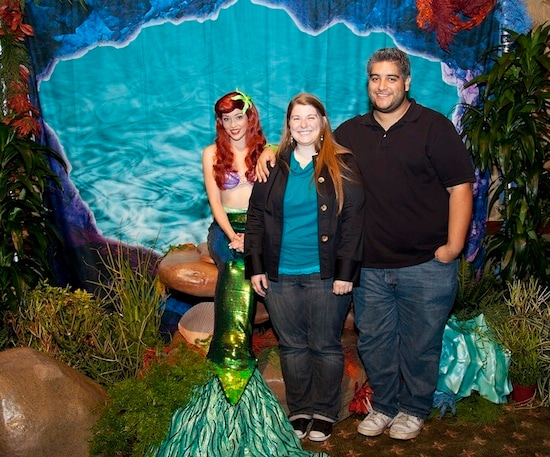 We’ll tell you more about what the Imagineers and animators had to say in another post. Today, we want to share two stories about our guests. They came from down the street in Anaheim and from as far away as Idaho and St. George, Utah.

Samantha and Anastasia, a mom and daughter from El Dorado Hills, traveled from Northern California for the meet-up. Samantha told us why she’s looking forward to the new attraction: “Ariel is the best princess ever. She’s a princess and a mermaid. How can you beat that?”

Logan Kendell and Katrina Maughan drove nearly 400 miles Tuesday from St. George, Utah, stopping on the way to don a suit for the event. Logan is a big fan of Disney and animator Andreas Deja.

When Logan met Andreas, he asked: “What was the first thing you did for Disney?” The animator told him a story about his first year at Walt Disney Animation Studios, working with then little-known director Tim Burton. That was just before Dejas began working on “The Little Mermaid” film – more than 25 years ago . After the panel discussion, Logan and Katrina wished they could stay for the opening of The Little Mermaid ~ Ariel’s Undersea Adventure. 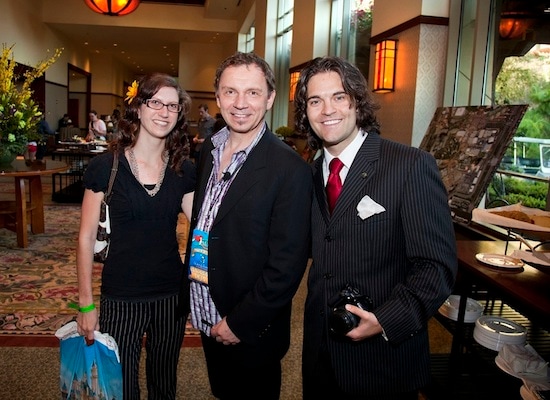 The evening closed with reserved viewing for “World of Color,” which is located just across the way from the new Little Mermaid attraction. I hope our panelists and guests had as much as fun as we did. Thank you again, Lisa, Larry, Chris, Mark and Andreas for giving our meet-up guests such a great experience last night, and thanks to all of our guests for coming to the event and following us on the Disney Parks Blog, Facebook and Twitter.

Stay tuned for a follow-up post with more insights from the Imagineers.