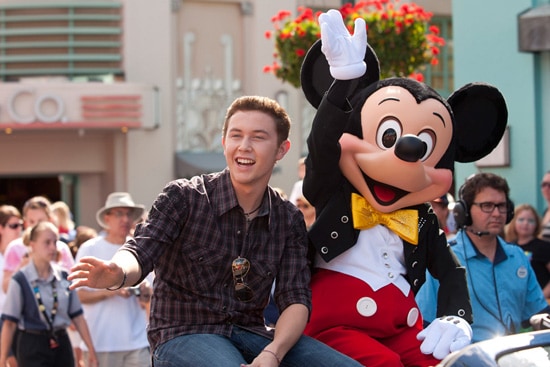 What a week it’s been for Scotty McCreery. One night he is having his name announced as the newest “American Idol” to an estimated 29.3 million viewers by Ryan Seacrest on the hit television show, and a few days later he is at Walt Disney World riding in a gala parade with Mickey Mouse by his side.

The humble and personable 17-year-old country crooner from Garner, N.C., was the star May 30 in a morning parade through Disney’s Hollywood Studios. Riding next to Mickey (who knows a few things about celebratory parades himself), Scotty waved to the thousands of fans gathered along Hollywood Blvd. In front of “The American Idol Experience” attraction, Scotty thanked the fans for their dedication and support. He then treated the crowd to a live performance of “I Love You This Big,” his new hit single, and later made a surprise, walk-on appearance inside “The American Idol Experience.”

Scotty said he’s looking forward to the nationwide “American Idols LIVE! 2011 Tour” and coming back to central Florida when the tour stops in Orlando on July 24.