We’re getting ready for high-seas adventure here at the Disneyland Resort with the World Premiere of “Pirates of the Caribbean – On Stranger Tides” at Disneyland park on Saturday.

Tickets to the event sold out in three days, with all proceeds benefiting the Boys & Girls Clubs of America. If you’ve been to Disneyland park recently, you might have noticed that we’ve been preparing for the park’s first 3D outdoor World Premiere ever. We’re building a 90-foot-wide, six-story-tall motion picture screen on an island created especially for this event. 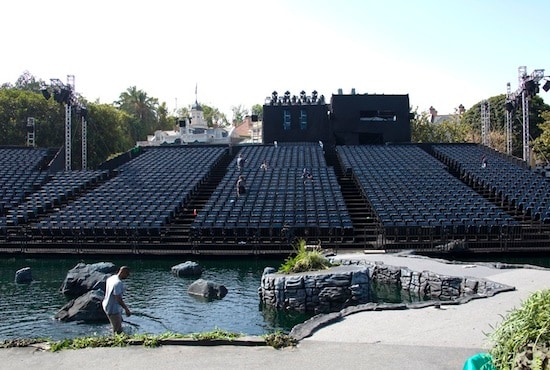 A state-of-the-art outdoor amphitheater – fully carpeted with stadium seating – is being built right on the Rivers of America just outside of the Pirates of the Caribbean attraction.

Watch for a recap of the World Premiere of “Pirates of the Caribbean – On Stranger Tides” on Monday, with photos from the “black” carpet – including stars from the film and other special guests.

Destinations: Setting the Stage for ‘Pirates of the Caribbean – On Stranger Tides’ World Premiere at Disneyland Park