Best of Both Worlds at Disneyland Resort

I know many of you are Star Wars fans, and above all, Disney fans! So what do you get when those two things come together? Two very special Sci-Fi Academy-themed pin release and signings are taking place this summer at the Disneyland Resort.

In one of my recent posts about Disney Pins, I gave you a heads up to “mark your calendars” for July 9 and August 6. Here’s a glimpse at some of the pins that will be released at each event. 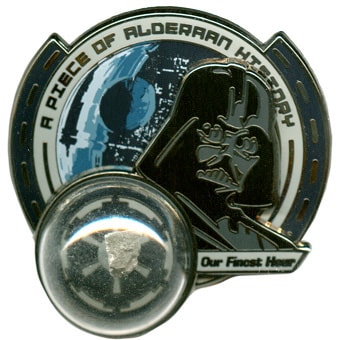 First up, A Piece of Alderaan History. What does that mean exactly? Well, any Star Wars fan will tell you, that Alderaan was once home to Princess Leia, a peaceful planet that met its untimely demise when Grand Moff Tarkin demonstrated the power of the Death Star in Star Wars: Episode IV A New Hope. Our product development team cleverly created a pin featuring Darth Vader that contains a representation of the planet Alderaan.

What else do we have “in store” for you for during the July release and signing with artist Casey Jones? How about Disneyland Resort attraction-themed postcard and pin sets featuring some of your favorite characters, like nutty Chip ‘n’ Dale in Rocket to the Moon or Pluto and the Flying Saucers. You can also look forward to a special limited edition set of four pins which comes complete in what is being called The New Century Compendium of the Extraordinary – Volume I.

Tip: Online wristbands for the opportunity to purchase these pins is taking place now through June 29.

Too much PINformation, or are you ready for more? How about a quick look at some of the pins that will be released at the August event, which feature memorable quotes and images from iconic Star Wars films. Here’s a special note: We just learned that Artist and Global Creativity & Innovation Director Chris Chapman will be on hand for a special appearance and signing on August 6.

So now you’re in the know for all events this summer related to pins. And if you’re looking for other fun places to trade during your visit to the Resort, Come Out and Trade takes place daily from 1:30-3:30 p.m. at Westward Ho Trading Co. in Frontierland at Disneyland park. Or you can jet over to Fly ‘n’ Buy in Disney California Adventure park where there is a special area for you to trade stories and pins with fellow fans.

Likes (0)
Share Best of Both Worlds at Disneyland Resort