From your enthusiastic response, we’re thrilled to see how much you’ve enjoyed the first two episodes of “My Yard Goes Disney”. The inspiration for tonight’s backyard makeover didn’t come from Walt Disney World Resort…or Disneyland Resort, for that matter. This week’s episode took its cue from the biggest “dream” of all: the Disney Dream cruise ship. Tonight’s lucky family is the Farrells. They’re all Disney, all the time, on land and at sea. They told the show’s producers they have 3,000 Disney related family pictures, with 600 from their Disney Dream cruise in January alone! They were on the ship in its first month of sailing on a cruise that they describe as “the most amazing four days of their lives.”

What I think you’ll find amazing is the truly extraordinary backyard the designers built for them. You know by now that I love to bring you sneak peeks, so check it out. Mickey Mouse-shaped pool, anyone? The episode required filming with the family aboard the Disney Dream in the luxurious staterooms, Senses Spa & Salon, Palo and even on the AquaDuck water attraction. It was a tough assignment. (See? I told you I have the best job at Disney Parks).

Speaking of the AquaDuck, we developed this incredibly cool camera mount just for this attraction and captures in-the-moment reaction of the family riding. Check it out in tonight’s episode.

Here’s one more picture. The show’s designers created a cool backyard addition inspired by a statue at a Disney destination other than the Disney Dream. Who has the first correct guess? 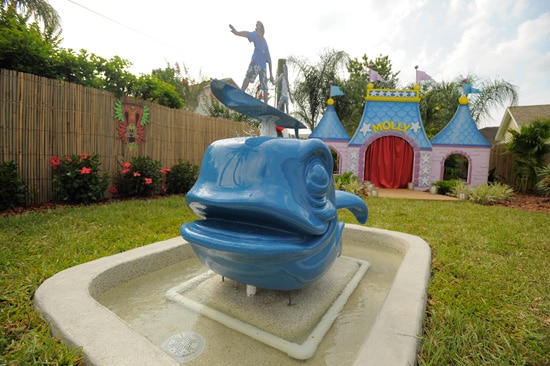