Raiders of the Disney Parks Merchandise “Snakes. Why’d it have to be snakes?” I love that line from “Raiders of the Lost Ark,” which celebrated its 30th anniversary on June 12. I can vividly recall watching the film with my parents in a small, one-screen theater somewhere in western Pennsylvania. I was recently reminded of how much I enjoyed the film when I took my children to Disney’s Hollywood Studios. There, we rode The Great Movie Ride and saw the Indiana Jones Epic Stunt Spectacular. My son, who is now about the age of when I first saw the original film in 1981, loved both attractions. Who wouldn’t want to travel the world in search of lost treasure? I know I would, so I donned my fedora and headed out in search of Indiana Jones-themed merchandise. My first stop was the temple of Disney Design Group where I met my guide and Disney Character Artist Casey Jones who shared with me his work on a new two-figure set. 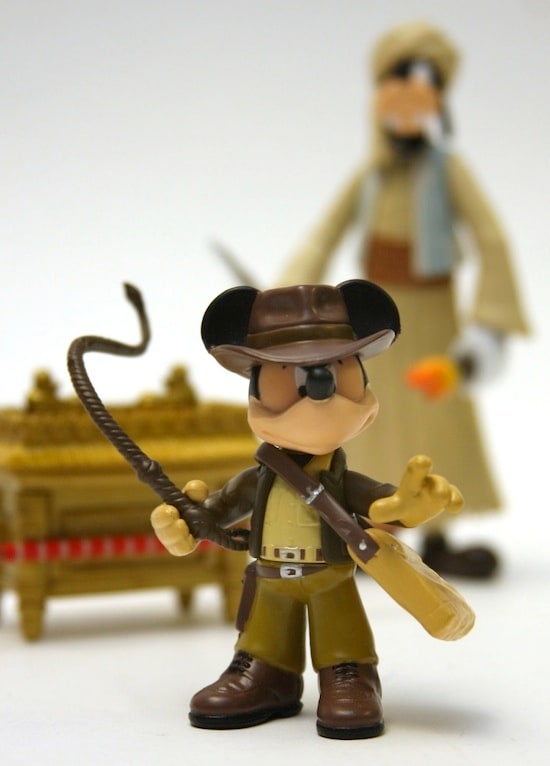 A new two two-figure set featuring Mickey Mouse and Goofy playing Indiana Jones and Sallah respectively is coming this Fall. The set will also come with a few accessories like the infamous ark from the first film. Casey was responsible for drawing Goofy as Sallah.

“Goofy as Sallah is the new figure in this set,” explained Casey. “Using photo reference and costume sketches from the film, it took me about three to four days to design the Goofy and his props. We introduced the Mickey Mouse as Indiana Jones figure a few years ago. The addition of the Goofy figure, the ark and other accessories completes the story [in this set].” 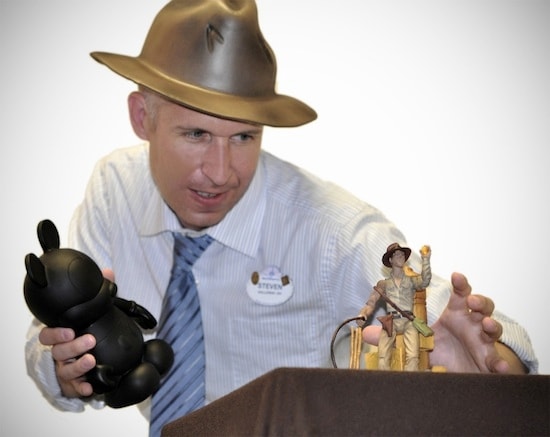 Casey also shared with me a new Indiana Jones action figure which he helped create. This articulated figure comes with a background scene and all sorts of accessories like Indy’s infamous whip and a removable fedora. I wonder if anyone would notice if it was replaced with a Vinylmation figure.

After meeting with Casey, I ran into fellow adventurer and Disney Character Artist Mike Sullivan. He shared with me a first look at artwork for a new bank scheduled for release in January 2012. “This new bank features Mickey Mouse playing the role of Indiana Jones,” said Mike. “The unique element to this bank is that it features stylized icons that represent each of the four Indiana Jones films.”

Can you find them? I particularly like the idol that is in Mickey’s hand.

The best places to find these and other items are at the Indiana Jones Adventure Outpost locations found in both Adventureland at Disneyland park in California and at Disney’s Hollywood Studios in Florida.

Time to cue the music as I ride off into the sunset.