Can a person ever see enough cool photos of the Main Street Electrical Parade?

That’s exactly what came into my head when I found this photo in one of our archives several weeks ago. This vintage promotional shot (no year specified) showed the parade like I’ve never seen it, placing 15 floats, fireworks and an illuminated Cinderella Castle all in one frame. I’ve been saving this photo to share with you on just this occasion – the anniversary of the Main Street Electrical Parade. 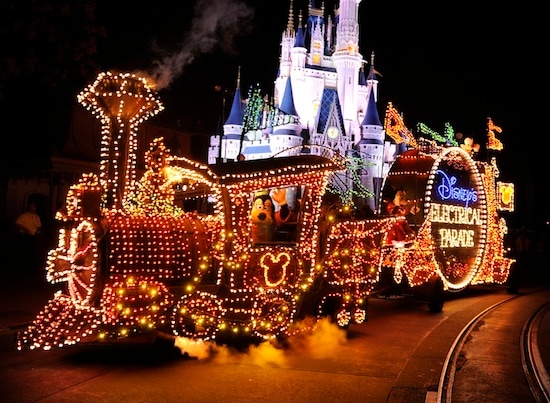 This nighttime spectacle, in which scenes from Disney films come brilliantly to life against the backdrop of a night sky, is the longest-running parade in Disney theme park history. It’s also one of the largest Disney parades, consisting of 23 floats, 80 performers and more than 600,000 lights.

The parade originally debuted at Disneyland park on June 17, 1972.  The Magic Kingdom park received its own version which debuted June 11, 1977, and was performed nightly through 1991. It returned 1999-2001, and again for a third time in 2010. Last year, I met a cast member who worked on the parade during its original debut who described to me what a big deal this parade was at its launch. At the time, he said, no one had ever seen anything like it – an entertainment spectacle that combined music and technology in a way that left spectators staring in awe. Today’s parade is only slightly modified from the original version. It’s now led by Tinker Bell, instead of the Blue Fairy from “Pinocchio,” and the soundtrack has been enhanced to include music from “Pirates of the Caribbean: The Curse of the Black Pearl.” It also now features energy-saving LED lights.

Do you remember your first Main Street Electrical Parade experience?