What’s Next at the Disneyland Resort and Disney Destinations

With the openings of The Little Mermaid ~ Ariel’s Undersea Adventure, Star Tours and “Mickey’s Soundsational Parade,” Disney Soundsational Summer is getting underway – and we’re already looking ahead to what’s coming next.

Inspired by the Disney•Pixar blockbuster “Cars,” Cars Land will feature three immersive family attractions showcasing characters and scenes from the movie, including one of the largest and most elaborate attractions ever created for a Disney park: Radiator Springs Racers. Other Cars Land attractions will include Luigi’s Flying Tires (remember the Flying Saucers in Tomorrowland?) and Mater’s Junkyard Jamboree when the new land opens in 2012. 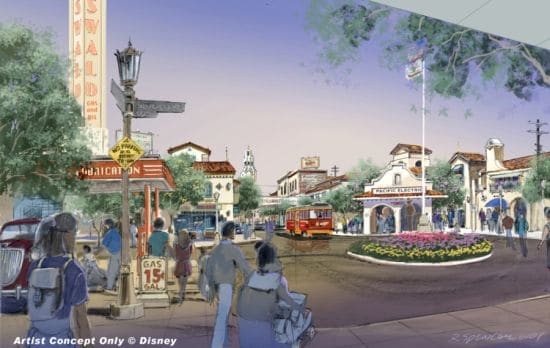 Also coming in 2012, a new entrance will welcome guests in Disney California Adventure park. A new entrance gate will take guests into Buena Vista Street, immersing them in the atmosphere Walt Disney experienced upon first arriving in Los Angeles in the 1920s. Buena Vista Street will feature new Southern California Red Car Trolleys and the Carthay Circle Theatre, modeled after the historic theatre, which was the site of the 1937 world premiere of “Snow White and the Seven Dwarfs.”

Also, just announced today: Carthay Circle Theatre will become home to a new lounge and an elegant restaurant, designed to be the premiere dining location in Disney California Adventure park.

Farther afield, Aulani, a Disney Resort & Spa, Ko Olina, Hawai’i, will open to guests on August 29, 2011. Each day of their stay, Aulani guests will be able to customize their experiences – relaxing on the beach or in the spa, playing in the unique pools and water play areas, dining in the resort’s signature restaurants, discovering the island on specially planned excursions, gathering at the fire pit for storytelling, or spotting the statues of Menehune, the legendary island little people, hidden throughout the resort.

Also coming in 2012, Disney Cruise Line will add new western ports and itineraries, when the Disney Wonder adds Pacific Coast cruises from Los Angeles, calling on San Francisco, San Diego and Ensenada, Mexico. Also new will be a 15-night voyage to Hawaii from Los Angeles, calling on Hilo; Kahului, Maui; Honolulu, Oahu; Nawiliwili, Kauai; and Ensenada, Mexico. And for the first time, Disney Cruise Line Alaska cruises will depart from Seattle in 2012, along with Vancouver.

Beginning in fall of 2012, the Disney Wonder’s sister ship, the Disney Magic, will sail 12 seven-night cruises from the Port of Galveston, Texas, to the Western Caribbean. Ports of Call will include Grand Cayman and Mexico’s Costa Maya and Cozumel. The Disney Magic will also sail out of Port Canaveral, Florida, on Caribbean and Bahamian itineraries and, for the first time, out of New York with cruises to the Bahamas and the along the New England coast.

There are so many new things to look forward to – which are you most excited about?

Destinations: What’s Next at the Disneyland Resort and Disney Destinations