Want to find out why scientists are creating “vulture restaurants” to combat the decline of these birds in Nepal? Or perhaps you want to explore the Atlantic forests of Brazil and the tapir —a fascinating pig-like creature that actually is related to the horse and rhino? Or would you rather go fishing to understand the approach to helping Nassau grouper make a comeback? 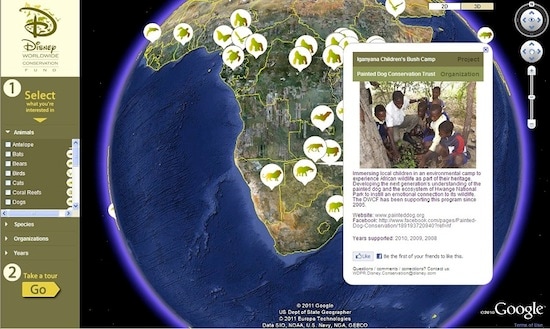 Now you’re one step closer to these fascinating conservation projects with the new Disney Worldwide Conservation Fund’s (DWCF) Google Earth site, which enables you to take a virtual tour of places around the globe where DWCF is helping to protect wildlife and wild places.

Visitors to the DWCF Facebook page can click on “Discover DWCF” and search by animal type, organization or year funded to “fly” over conservation efforts supported by the DWCF annual grant program www.disney.com/conservation.

On the map, click a project icon and you see a snapshot summary of the project, a photo, and links to videos, websites, and social media sites, if available. You even could be the first to “like” your favorite project, and the story will appear on your Facebook Newsfeed with a link back to the Google Earth site.

The Disney Worldwide Conservation Fund has contributed more than $15.6 million to non-profit organizations since its inception in 1995 to support everything from training for gorilla patrols in Africa, to satellite support to monitor sea turtles, to a bush camp for children in Zimbabwe to learn about their native African wildlife.

Disney guests support the fund in a variety of ways, from adding a dollar or more to their purchases of food and gifts at Disney’s Animal Kingdom and select resorts, to participating in special animal experiences at Disney’s Animal Kingdom Lodge and The Seas with Nemo & Friends at Epcot, to purchasing reusable shopping bags and other items on Disney Cruise Line and at Walt Disney World and Disneyland Resorts.

This past Sunday (June 5) was a day of global recognition for World Environment Day. What better time to take a tour around the world, visiting projects that are making a difference for people and nature? And while you’re exploring the DWCF Google Earth site, why not become a fan of the DWCF on Facebook so you can stay up to date on the people and projects the fund supports.