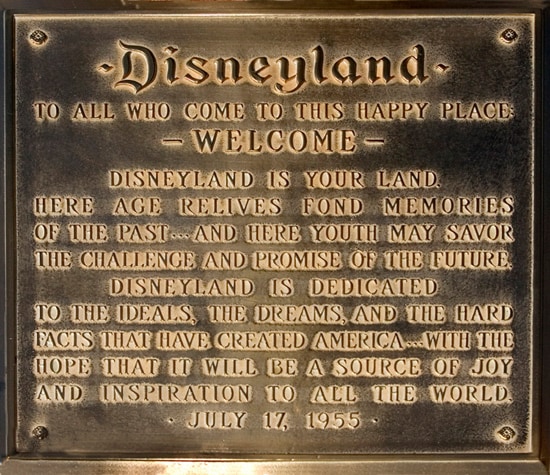 Fifty-six years ago today, Walt Disney read the inspiring words on this plaque during the official dedication of Disneyland park. Across the country, an estimated 90 million television viewers were watching an unprecedented live broadcast of the day’s festivities on ABC.

Around the time of our anniversary each year, I see a photo of Walt which is often erroneously described as a photo taken during the opening ceremony. Perhaps you have seen this photo too. Have you ever noticed that Walt is not wearing his necktie in this picture? That’s because this is actually a photo taken during a rehearsal for the telecast. The photos we have that were taken during the official dedication were taken from the side. 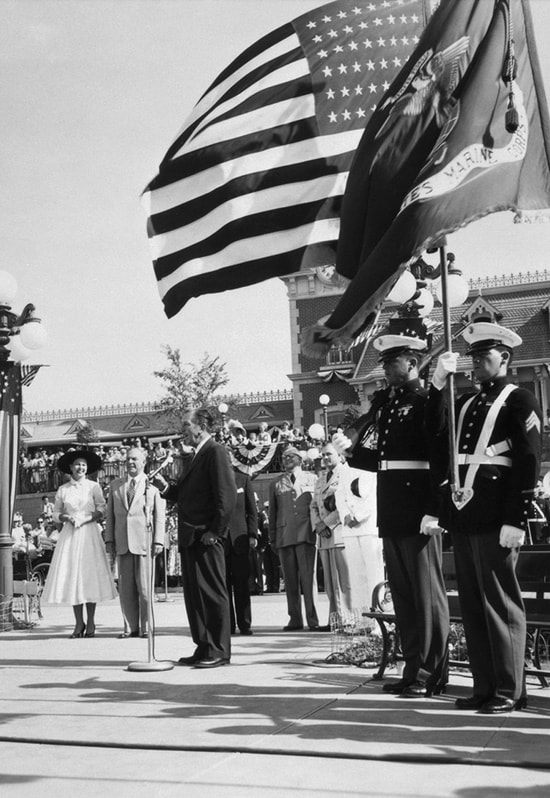 Now, it’s been said that practice makes perfect, but if you’ve ever had the pleasure of watching our opening day television special, “Dateline Disneyland,” you know this isn’t always true. The live broadcast was the largest of its kind ever attempted and included 24 separate cameras. Naturally, in such a huge undertaking, there had to be some rehearsal to ensure things would run as smoothly as possible, and we have some more fun photos from the earlier “run-through” of the day’s festivities to share.

These next pictures show Walt with California Governor Goodwin Knight, parading down Main Street, U.S.A. Can you guess which one was taken during the rehearsal? 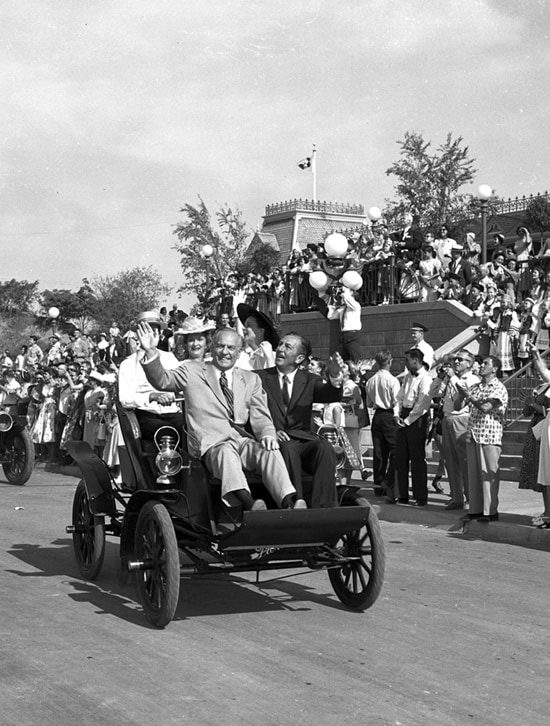 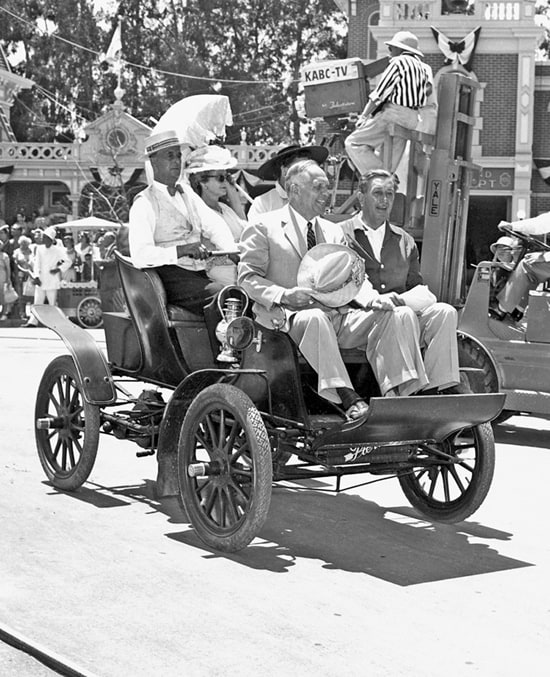 In this rare photo, Walt practices the dedication of Fantasyland in the area just southwest of Sleeping Beauty Castle. I think his pride is so obvious in this photo. Don’t you just love the smile on his face? 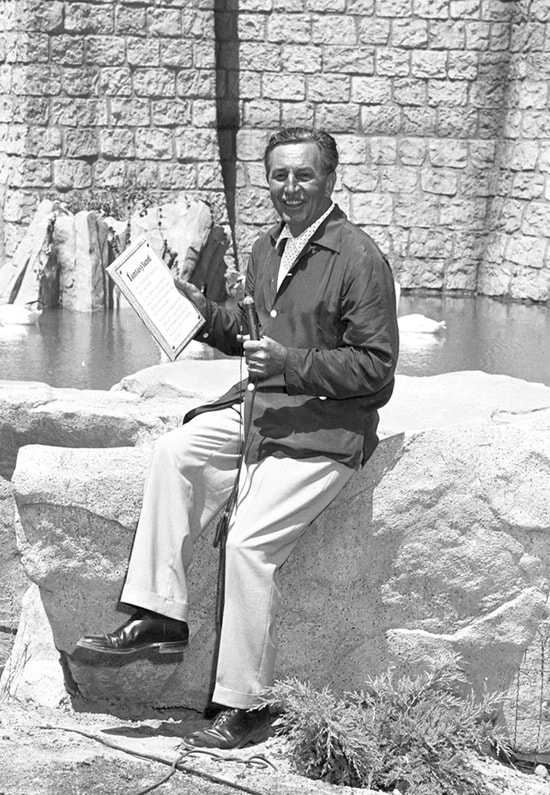 Among others rehearsing for their part in the the big show were television host Art Linkletter, and “Davy Crockett” stars Fess Parker and Buddy Ebsen, shown here in Frontierland before the broadcast. 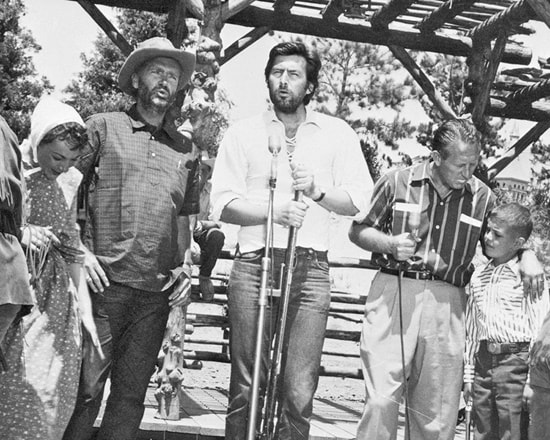 Meanwhile, outside the entrance to Frontierland, actor and television personality Ronald Reagan was getting ready for his part in the landmark TV special. 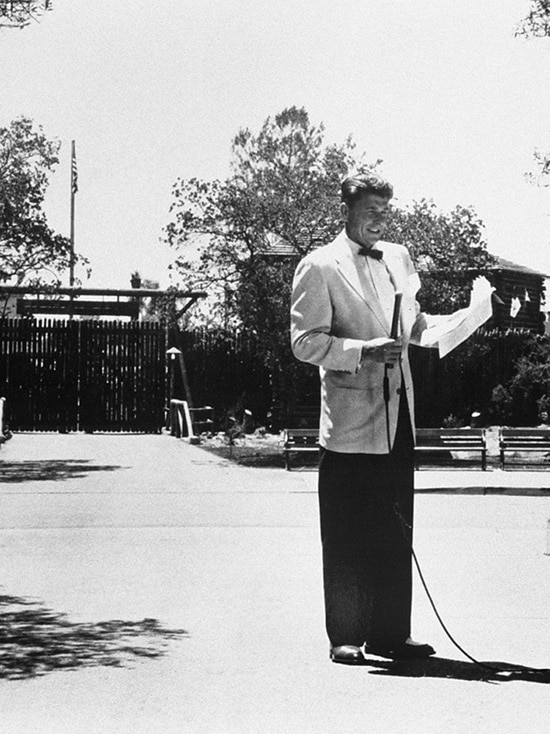 Finally, a “prequel” photo of sorts. We’ve all seen the photo of children entering Fantasyland for the first time during the opening day broadcast. In this rare photo, those same children are seen from the other side of Sleeping Beauty Castle as they prepare for the big moment. 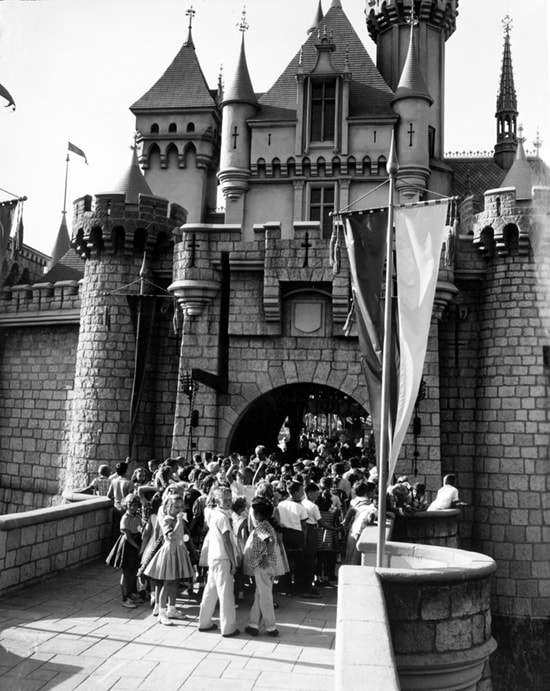 You may remember a fun story we shared last year about one of these children, Robb Fischle, who works as a Disneyland Resort cast member today. Check it out here.

Destinations: Getting Ready for Disneyland Park to Debut – A Look Back at July 17, 1955