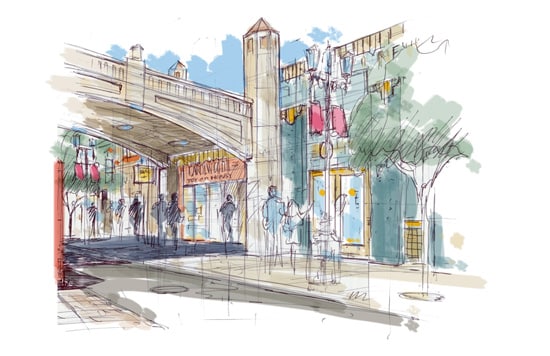 As we mentioned on Friday, work began yesterday at Disney California Adventure park to transform the current Golden Gate Bridge at the park’s entrance into a re-creation of the historic Glendale-Hyperion Bridge. The rendering above shows what the new bridge will look like when it is completed as part of the new Buena Vista Street area.

This new area will bring guests back in time to a classic era in the history of Los Angeles – when Walt Disney first arrived in California. You will practically walk in his footsteps through an environment inspired by iconic Los Angeles buildings and structures of the 1920s and ‘30s, like the Pan Pacific Auditorium (which served as the inspiration for the new park turnstiles that opened on Friday) and the Glendale-Hyperion Bridge.

In January 1926, Walt and Roy Disney moved the newly renamed Walt Disney Studios into its new facility – a one-story, white stucco building at 2719 Hyperion Ave. During the next few years, another Los Angeles landmark was taking shape just a few blocks down Hyperion Ave. – the Glendale-Hyperion Bridge. The bridge is a large, complex structure – still standing today and spanning Interstate 5 from Glendale, Calif., to the Silver Lake area of Los Angeles. 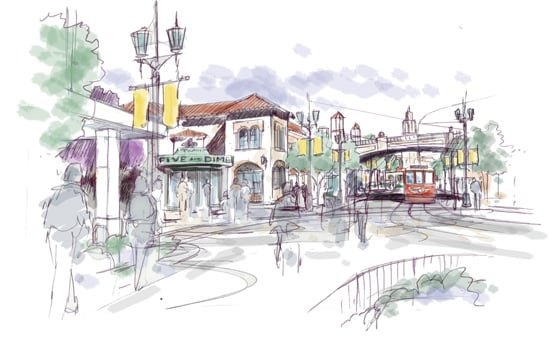 The artist’s rendering above shows the bridge as it will look next year when it is part of Buena Vista Street at Disney California Adventure park, with the Southern California Red Car Trolleys passing underneath and the Carthay Circle Theatre in the distance.