New 20,000 Leagues Under the Sea Merchandise Coming to Disney Parks 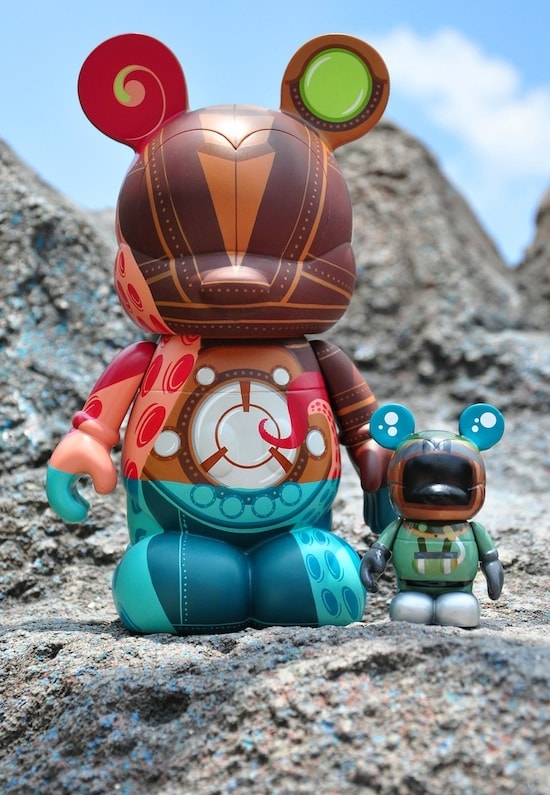 I can vividly recall sitting inside the Nautilus during my first visit to Walt Disney World in July 1983. I remember hearing the echoes of Captain Nemo’s voice yelling, “Dive, dive!” as I embarked upon my journey through liquid space. The attraction quickly became one of my favorites; I even drew a picture for a book my mom and I made after that first trip. I’m happy to share that new Vinylmation and Disney pins celebrating this classic attraction are coming soon to Disney Parks. I spoke with Disney Design Group artist Caley Hicks about her work on the new Vinylmation figure set pictured above. During our conversation, I discovered she also had fond childhood memories of the attraction.

“When I was younger, I visited the Magic Kingdom each month with my dad,” explained Caley. “I loved the 20,000 Leagues Under the Sea attraction, particularly the mermaids. I was eager to design something for Vinylmation to pay tribute to the attraction.”

Caley, whom you may recall from Vinylmation – Flags fame, chose the iconic squid attack for the nine-inch figure. She explained the difficulty in capturing the details of the squid on the Vinylmation form. “I learned that getting the squid to wrap around the Mickey Mouse shaped form was more difficult than I first thought,” continued Caley. “I used countless sheets of tracing paper to get the image correct. The finished figure looks wonderful, so it was worth the effort.”

Caley shared the artwork for the deconstructed nine-inch figure. Wow! I wouldn’t even know where to begin as I can’t draw a straight line. This limited edition 1,000 set also has a 3-inch figure designed by Disney Artist Jason Zucker that resembles a diver. Look for it to be released via the Disney Parks Online Store only on August 19, 2011. 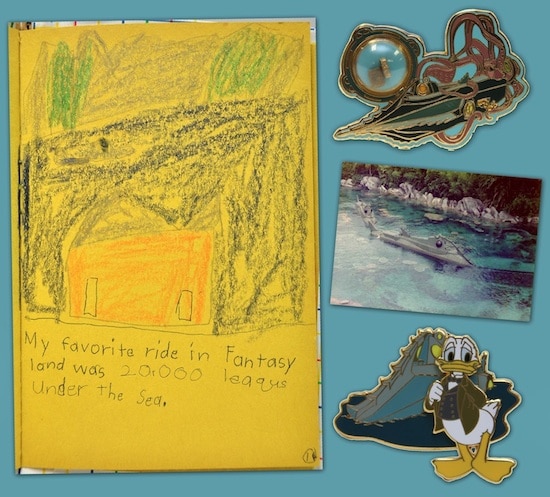 Since the introduction of Disney Pin Trading in 1999, the Disney Pin Team has featured 20,000 Leagues Under the Sea on a variety of pins. One of my favorites was released in January 2005, and featured a piece of an actual porthole from the attraction ride vehicle. It was the first in a long line of the “Piece of Disney History” pins, and is still one of the most sought-after pins today. 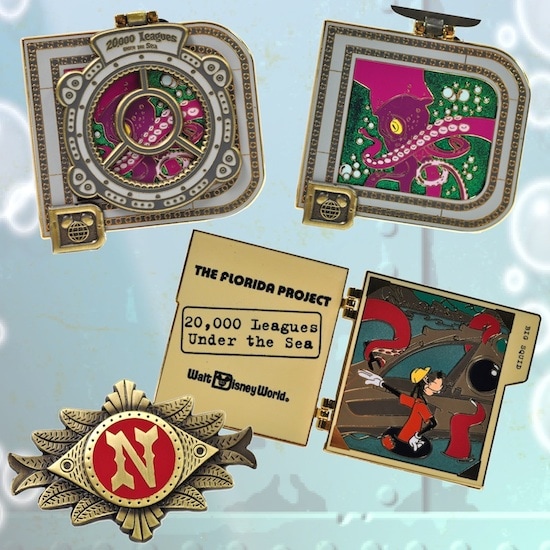 There are new pins on the horizon including two pins that will be released at The Florida Project in September. I think my favorite from the upcoming event is the cast member costume replica pin designed by Chris Chapman. It will be part of a boxed set of icon pins inspired by Fantasyland. The Classic “D” pin featuring the squid attack scene will be released on Oct. 27, at the Walt Disney World Resort.

By the way, I took the photograph above of the submarines as seen from the Skyway in 1983! I never imagined back then I’d be sharing it with you today. I would love to hear your memories from that great undersea voyage.