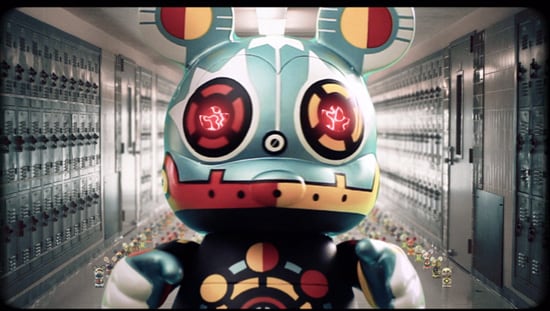 I love robots! My love for these machines probably comes from countless hours of watching science-fiction films like The Black Hole. I even dressed as a robot for Halloween when I was 4 years old. While I love robots, I certainly don’t want them taking over the world. Unfortunately, I think it is too late! Today, the robot invasion has begun at select Disney Stores across the United States and online with the release of Vinylmation – Robots #1. I spoke with Donald Ferro, Product Developer for Vinylmation at Disney Parks, about this unique partnership with the Disney Stores.

“The Disney Theme Park Merchandise development team is excited to partner with the Disney Stores as Vinylmation has become a focus for the entire Walt Disney Company,” explained Donald. “I believe at the heart of Vinylmation is creativity, great design and fun storytelling. The Robots series is actually the third set designed by the Disney Store team and the figures look great!” This new series follows the limited-release model first introduced at Disney Parks. The series will feature 11 known three-inch figures and one mystery chaser figure. I can’t decide which figure is my favorite. When I showed my son the images above, he said he wanted them all (that’s my boy!).

The artwork for these figures was created by Disney Artists on the Disney Store art team. Donald explained the key to success has been good partnerships.

“We meet regularly with the Disney Store team,” continued Donald. “Their art team works closely with our lead Vinylmation artists, Thomas Scott and Eric Caszatt, to review artwork, discuss designs and share best practices. The meetings have helped us create consistent products and experiences for both Disney Parks and Disney Stores.” 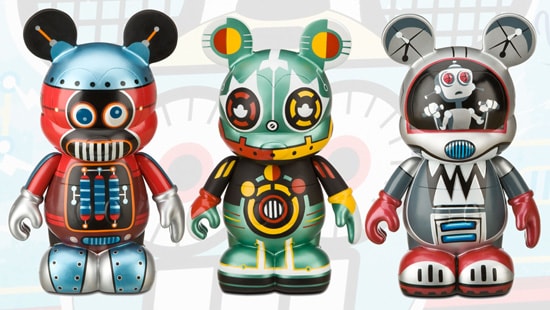 There will also be limited edition nine-inch figures released with a robots theme. I think my favorite is the robot who is driving another robot.

The Disney Store team produced a pretty incredible video staring these new robotic creations. After watching it, I’m hungry for a cheeseburger and vanilla milkshake from the Sci-Fi Dine-In Theater at Disney’s Hollywood Studios. The video seems like something you would see there.

Will these robots be invading Disney Parks?

“The first Robots series will only be released at the Disney Stores,” said Donald. “But I advise that you start making preparations now. I’ve heard reports that a second wave of robots could be making their way to Earth.”

Sounds just like one of those sci-fi movies I love.