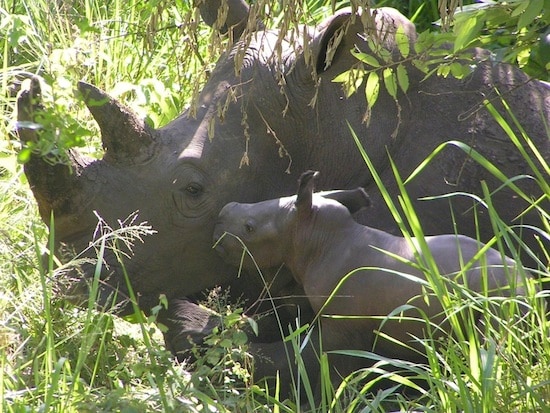 We’ve received fantastic news from the Rhino Fund Uganda. A white rhino named Nande, born here at Disney’s Animal Kingdom 12 years ago, gave birth June 4 to a healthy female calf at the Ziwa Sanctuary in Uganda. The baby, named Malaika (“angel” in Swahili), is the first female white rhino born in Uganda in more than 30 years. Malaika is Nande’s second calf. Her first, a male, was born in 2009.

Nande is one of two white rhinos born at Disney’s Animal Kingdom that traveled to Africa in 2006 as part of the first-ever reintroduction of white rhinos from the United States to Uganda. She was accompanied by Hasani, a male, and joined four other white rhinos at the Ziwa Sanctuary to help re-establish a white rhino population that has been extinct in Uganda since 1982 as a casualty of civil unrest in the region.

Disney’s commitment to conservation and rhinos goes beyond this first-ever rhino transfer. Guests can see both white and black rhinos on the Kilimanjaro Safaris. Research has shown that when people see wildlife face-to-face, they feel a strong connection and are motivated to take action to protect wildlife and nature. The Walt Disney Company Foundation and the Disney Worldwide Conservation Fund have supported more than $940,000 in rhino protection and research projects in partnership with non-profit organizations throughout the world. And Disney’s Animal Kingdom is accredited by the Association of Zoos and Aquariums (AZA). With its more than 200 accredited members, AZA is a leader in global wildlife conservation and a link to helping animals in their native habitats.

We are proud to contribute to the sustainability of this critical species and are deeply appreciative of the great care that Nande has received from the Rhino Fund Uganda team, who are closely monitoring her and her baby.

Take a look at more of the wildlife you can expect to see at Disney’s Animal Kingdom: