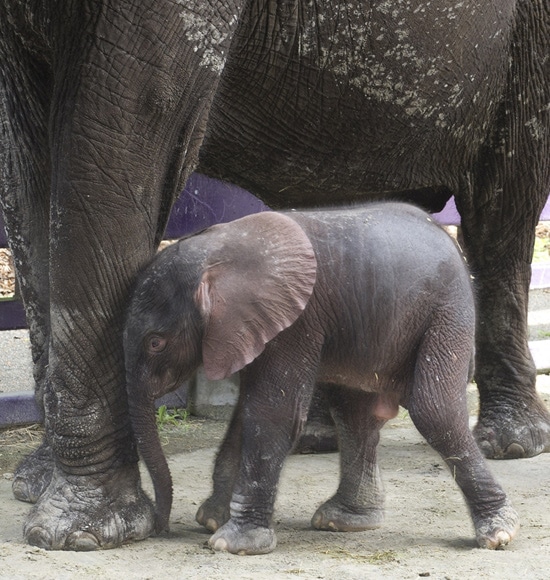 We’re proud to report that the elephant herd at Disney’s Animal Kingdom got just a little larger with the birth yesterday (August 24) of our newest calf. Weighing 311 pounds, the male African elephant (no name yet!) was welcomed into the group by his mother Vasha, 10 herd members and our animal care professionals assisting with the birth.

This latest addition is the second calf for 25-year-old Vasha, who gave birth to a female calf, Kianga, in 2004. The natural bonding between mother and calf is fascinating to watch (wish I could spend the whole day watching our elephants!). The team is encouraged by the early interaction between mother and calf and will continue to monitor them closely for the next several weeks. These great photos of mom, big sister, and the new calf were taken by Disney photographer Gene Duncan. 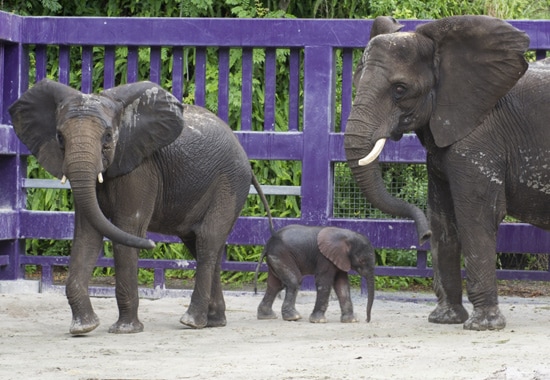 The next critical milestone is for the calf to continue the bonding process with his mother who will teach him important lessons and protect him as he gradually acclimates to the rest of the savannah herd over the next several weeks.

Vasha became pregnant through artificial insemination in October 2009 and received extensive pre-natal care throughout pregnancy. Since early August, our animal care team has provided round-the-clock monitoring, regular ultrasounds and daily hormone monitoring to more accurately predict the beginning of labor. In the past few years, Disney’s animal care teams have been able to narrow the birth window to within four days, which enables them to better prepare for the delivery.

This is the sixth elephant born at Disney’s Animal Kingdom. Others include:

Of the many animal care and conservation efforts undertaken by the Animals, Science and Environment team, there’s none that we’re more proud of than the team’s work on behalf of elephants. These efforts not only benefit elephants in the wild and in zoological facilities, they also benefit people in communities in Africa – and connect the millions of Guests who visit Disney’s Animal Kingdom with one of the most amazing creatures in the animal world. After all, who wouldn’t be inspired by seeing a herd of elephants (Disney’s Animal Kingdom has one of the largest African elephant herds in North America), including youngsters, in such a beautiful setting.

Disney has been at the forefront of efforts to better understand and care for endangered elephants. Disney’s Animal Kingdom is part of a breeding program coordinated by the Association of Zoos and Aquariums (AZA) www.AZA.org that is focused on sustaining the elephant population in North America. AZA’s Elephant Species Survival Plan has called for a five-fold increase in African elephant reproduction efforts – using both natural and artificial breeding methods – in order to create a self-sustaining elephant population among North American zoos and wildlife centers. The Disney Worldwide Conservation Fund and the Disney Foundation have directed over $1 million to projects in 20 countries to help protect and conserve elephants in the wild.

For more on the elephants at Disney’s Animal Kingdom, see the posts below: