Dog Days? Not! In the Tiki Room, Every Bird Has Its Say 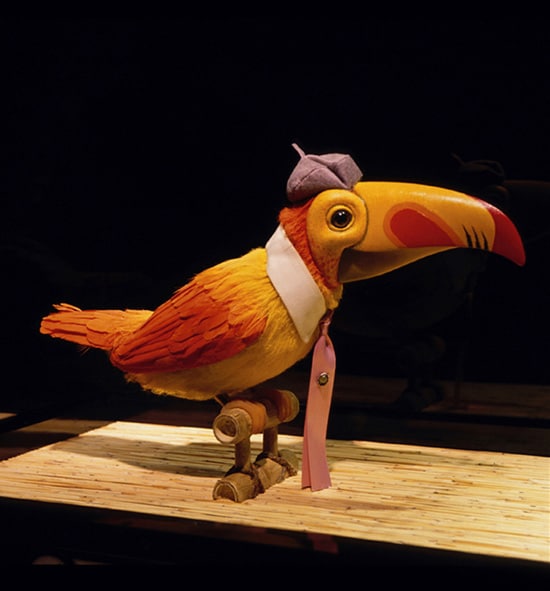 In 1939, birds helped Snow White with the housework. In 1942, birds of the forest flitted around Bambi. In 1950, bird friends helped primp Cinderella for the royal ball.

Clearly, Walt’s cinematic creativity was for the birds. (Buh-duh-bump!)

In the midst of all the creativity showcased on film, Walt traveled to France. While shopping, his eyes beheld a bird in a gilded cage, chirping and singing, its beak moving. But this bird was alive only through mechanical invention.

He bought the bird in the gilded cage, an item that to most people would be a conversation piece for a living room mantle. For Walt Disney, though, this bird perhaps held the secret of breathing three-dimensional life into the birds and bees and all the rest of the beings that populated his animated motion pictures.

So he put the bird in the gilded cage in the care of his “Imagineers” to figure out what made it chirp and move … and thus began the quest that would reach a milestone on June 23, 1963, with the opening of the Tiki Room at Disneyland park. The show is regarded as the first Audio-Animatronics production.

Walt Disney’s Enchanted Tiki Room at Walt Disney World Resort pays tribute to the original Disneyland show, maintaining the original intent created by Walt Disney and his original team of Imagineers. At the same time, it features some modern technology – a state of the art show-control system, remastered audio, and a new versatile and energy-efficient lighting system.

José, Fritz, Michael and Pierre and their tropical friends – more than 200 birds, flowers and tikis – come to life daily in Adventureland, at show times throughout the Magic Kingdom Park operating day.

As for the bird in the gilded cage? My contacts at Imagineering tell me there actually are two gilded cages, one at the Disney archives in California, the other on display in One Man’s Dream at Disney’s Hollywood Studios.

Likes (1)
Share Dog Days? Not! In the Tiki Room, Every Bird Has Its Say