Have You Seen the Jungle Cruise Bird at Disneyland Park? 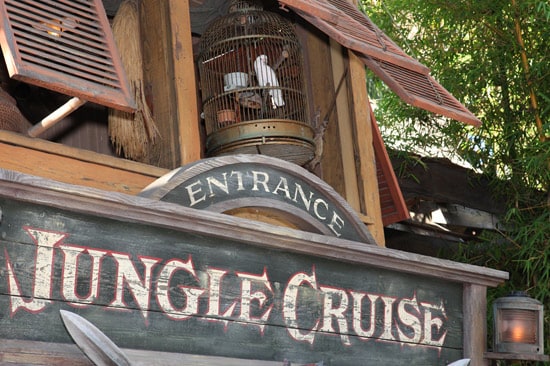 Next time you’re heading into the Jungle Cruise at Disneyland park, look up. At the window above the entrance to the attraction you may see Zoyie, a Goffin’s Cockatoo, watching as you pass beneath. For more than fifteen years, Zoyie has watched not-so-silently as Disneyland park guests make their way through Adventureland.

With a distinctive personality – “spunky, high-spirited,” as she’s described by Circle D Corral Stable Attendant Kirsten Foster – Zoyie is the kind of bird who likes to see and be seen. A true showbird, she loves to dance to music and perform her favorite trick with her favorite snack: a peanut.

Since cockatoos are very intelligent, the team at Circle D Corral always works to keep Zoyie entertained and occupied. While on her perch at the Jungle Cruise and at her home in the corral, she has lots of games and toys to keep her busy. One of her favorite activities involves a box with treats hidden among shredded paper. It’s a rewarding challenge for this smart bird. And she’s got no shortage of playmates – in addition to her fellow bird friend, Poppy, who is “learning the ropes” at Circle D, her handlers make time to play with her every day.

“It’s a pretty fun life for a bird,” says Kirsten.

Zoyie also likes to say her own name. As she’s carried out to the park in the morning, she passes through a short backstage tunnel, where she likes to repeat her name and make lots of noise so she can hear herself echoed throughout the tunnel.

One of her favorite activities, though, is watching guests walk by from her perch above Adventureland. If you see Zoyie next time you’re there, be sure to say hello!

Likes (0)
Share Have You Seen the Jungle Cruise Bird at Disneyland Park?