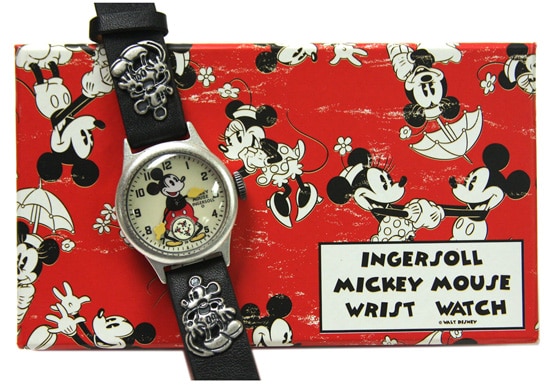 I’m beyond fascinated with time. Whether you believe that time is linear or cyclical, the biggest challenge I face is that I never have enough of it (oh, 36-hour day – where are you?). Luckily, there are several new timepieces coming to Disney Parks that will help me keep track of my disappearing time. Some of these new timepieces salute the first Mickey Mouse watches made by the Ingersoll Waterbury Clock company. Signed by the late Disney Legend Kay Kamen, Ingersoll was the first Disney licensee to introduce Disney watches at the 1933 Chicago Exposition. The original watches were an immediate hit and are now highly desired collectors’ items. I spoke with Tracie Alt, Product Developer for Timepieces, about the introduction of these tribute timepieces.

“We are excited to introduce these classic Mickey Mouse timepieces to Disney Parks in the United States,” explained Tracie. “There is a lot of history that comes with these watches and they are a great tribute to the heritage of the Walt Disney Company. While the watches look like the originals, they were made with modern materials.” 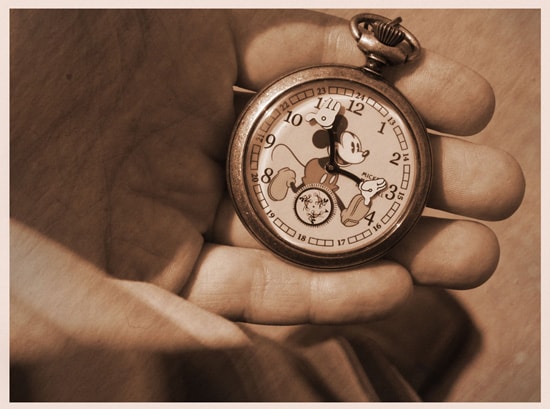 I think my favorite is the pocket watch as it reminds me of a pocket watch I had when I was younger (except I think I need a waistcoat). Good news if you are attending the D23 Expo this coming weekend! These Mickey Mouse watches will debut in the Dream Store. Tracie also told me that guests attending the Expo will get a sneak preview of something new. 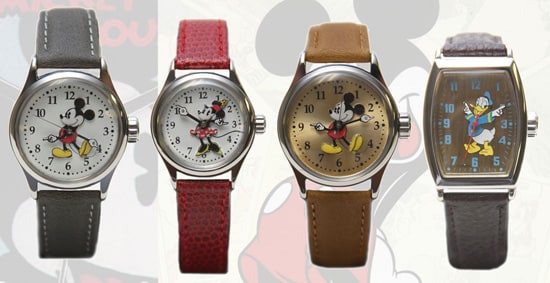 “We will have a sneak preview of several classic Disney watches by Ingersoll at the D23 Expo,” continued Tracie. “These watches feature classic Disney characters like Mickey Mouse, Minnie Mouse and Donald Duck, paired with fashionable designs. They will be released this coming fall.”

Spoiler alert for my mother – I think I found your next birthday gift. She is a Minnie Mouse fan yet I’m drawn to the Donald Duck design. Each classic Disney watch will be packaged in a Mickey Mouse shaped metal tin.

I have “time” for one more preview (yes, I write all the jokes). My fellow Disney Parks Blog author Michelle Harker shared with me this artwork by Disney artist Eric Scales. The designs are part of the Artisan Watch Program at Disney Parks and were created especially for the D23 Expo. Each watch will have an edition size of 100 and a retail of $125.