UPDATE: We’ve confirmed with Walt Disney Imagineering that the name for the new Walt Disney and Mickey Mouse statue at Disney California Adventure park will be “Storytellers.” 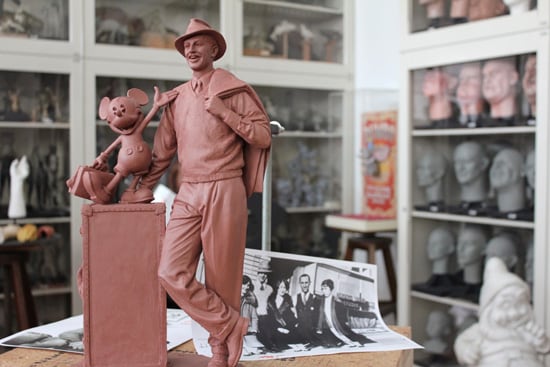 A new statue of Walt Disney and Mickey Mouse will be featured on Buena Vista Street when it opens in 2012. Walt Disney Imagineering unveiled a maquette similar to the one pictured above, showing what the statue will look like. In this Q&A with the Disney Parks Blog, Ray Spencer, creative director for Buena Vista Street, explains the story behind the remarkable statue.

How does this statue help tell the story of Buena Vista Street?

It is a young Walt Disney as you would have seen him when he just stepped off the train from Kansas City in 1923, arriving in California to pursue his dreams. The street is set in the time period between 1923-1937, the time when Walt arrived and subsequently innovated, risked and created the studio that is the origin of all that The Walt Disney Company has become. He is located on the ground, not on a pedestal or planter, so that he is accessable to guests – “one of us.” Early Los Angeles (Buena Vista Street) is Walt’s land of opportunity and dreams at this time, and metaphorically it is for our guests as well!

Tell us what is going on in the scene depicted in the statue.

Walt has just arrived in California from Kansas City, and as he looks around in wonder and optimism, the world is his oyster to realize his dreams.

The statue is also an amalgam of young Walt and early Mickey Mouse. Mickey Mouse – although not created until after Walt’s arrival in Los Angeles – was, according to story, created on a train and was part of Walt’s travels and his muse, and is a fitting travel partner.

How does this statue compliment the iconic Partners statue at Disneyland park?

In Disney California Adventure park, the statue is of young Walt as he arrived in Los Angeles, and at this point in time nobody knew who he was. He is one of us, and his optimism and enthusiasm are yet to be proven. In a way at this point in his life he is “everyman” but you can see it on his face, and in Mickey’s, that through this remarkable individual’s dreams and efforts, something great is going to happen.

How did you decide on the placement of the statue?

We wanted it in the new Hub, facing the center and on the street corner, so that he is one of our guests. We also wanted him near the Carthay Circle Theatre so that he could be part of that scene as well.

The statue maquette is on display this weekend at the Parks & Resorts Pavilion at the D23 Expo and will later be seen in the Blue Sky Cellar at Disney California Adventure park.