Today in Disneyland History: Chicken of the Sea Pirate Ship and Restaurant 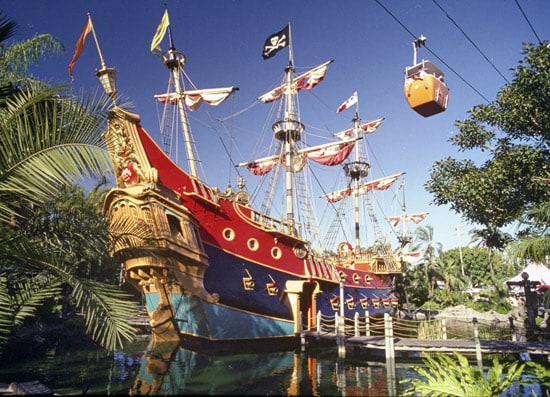 One of the best things about growing up in Southern California were the visits my family took to Disneyland park each year. The park was my Never Land, full of wonder and excitement that fueled my young imagination. To this day one of my favorite memories is of Captain Hook’s Pirate Ship and Skull Rock in Fantasyland.

Opening August 29, 1955, as the Chicken of the Sea Pirate Ship and Restaurant (later named Captain Hook’s Galley), the ship was home to a small quick-service location serving all things tuna. I remember eating my tuna burger as quickly as I could so I would have time to explore the area. I imagined I WAS Peter Pan as I navigated the waterfalls of Skull Rock, dueled with my sibling pirates on the deck and wondered how something so impossibly large as a ship could actually fly (pixie dust, of course!). Only at Disneyland could a restaurant inspire such imagination!

Closed to make way for the new Fantasyland, Captain Hook’s Pirate Ship and Skull Rock are no longer part of Disneyland park. However, they are more than just a memory as Imagineers created a fantastic version in Disneyland Paris.

EXTRA CREDIT if you can name the two other Disneyland park restaurants that opened in August 1955.

What is your fondest memory of this classic Disneyland location?