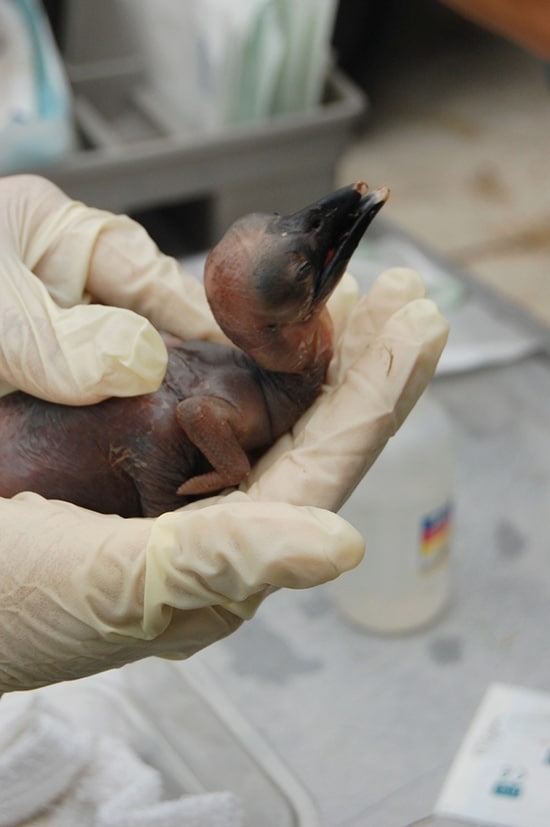 At Disney’s Animal Kingdom Lodge, we recently welcomed our very first Abyssinian ground hornbill chick. Zazu, from The Lion King, is a red-billed hornbill, so you could say that the chick is Zazu’s “cousin.” Steve Metzler, Animal Operations Manager, reports that the chick is doing great and mom is doing a wonderful job protecting and feeding it. The chick weighed 3.6 ounces at 2 days old. Its weight was checked as part of the chick’s neo-natal exam. These “well-baby exams” are performed on our newborn animals by our veterinarians to assess their overall condition. Adult female Abyssinian ground hornbills typically weigh 7-9 pounds and males weigh 12-14 pounds. We won’t know the sex of the new chick for several months.

Hornbills are what are referred to as “altricial” birds, meaning that when they hatch their eyes are closed, they have no down, they are incapable of leaving the nest and they are fed by the parents. Unlike some other bird species, like chickens and ducks, they will be cared for in the nest for several months and will slowly grow feathers and start looking more and more like the adult birds. In the wild, Abyssinian ground hornbills live on the African savannas north of the equator and south of the Sahara Desert. They are active during the day, foraging and hunting, and usually roam in pairs or in groups of three or four when young birds are present. These hornbills are mostly carnivorous and walk the savannah using their big bills to capture prey such as snakes and small mammals. They also will eat some fruits and seeds. Abyssinian ground hornbills rarely fly, preferring to walk or run when threatened – although they can and will fly if needed.

The biggest threat to hornbills in the wild is habitat loss. The Association of Zoos and Aquariums’ Species Survival Plan (SSP) for Abyssinian ground hornbills recommends expanding the current population numbers in accredited facilities to improve the overall genetic health of the population. Disney’s Animal Kingdom Lodge is committed to breeding this species to contribute to the overall goals of the SSP. Steve notes that this chick represents a great first step in contributing to our overall knowledge and experience with breeding this species.

The new chick and its mom are bonding in an off-show area, where the animal care team can closely monitor them. Over the next few months, the team hopes to introduce mom and chick back to dad, who is out on the Pembe savanna at Disney’s Animal Kingdom Lodge, so all three will be on show together.

For more on Disney’s Animal Kingdom Lodge, see the posts below: