A Disney Vinylmation Pirates Life For Me, Says I Arrr, one thin’ I’’e learned in life is that experience can be a key factor t’ success. Me be amazed at how somethin’ me learned long ago will e’entually come back t’ help I. This also happened to me hearty Casey Jones (luck have it he’s no relation to Davy), an artist who sails with the Disney Design Group, when he was asked t’ create a Vinylmation mystery series featurin’ those scurvy bilge-rats from Pirates o’ the Caribbean. Alas, this series was released in July at the D-Street locations in California and Florida. But late one night, Casey told me a whale of a tale o’ how an experience in 2003 helped him in designin’ these wee figures.

“Aye, me created sketches for Pirates o’ the Caribbean action figures in 2003,” snarled Casey. “Arrr, these figures war once sold at Disney Parks and war inspired by characters from the attraction. When me was asked t’ create the Vinylmation pirate figures, I dusted off those original sketches from me treasure chest and used them as a startin’ point for me reference material.” 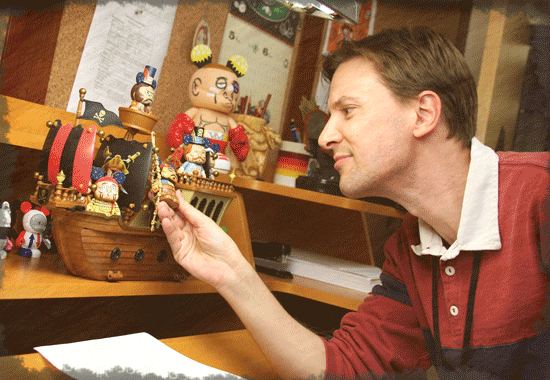 “Alas, th’ action figure sketches were realistic interpretations o’ the characters from ye attraction,” says Casey. “Th’ Vinylmation are like caricatures o’ the various characters. I took elements ye sees from the characters and made them fit on the blank canvas that’s shaped like that mouse named Mickey.” 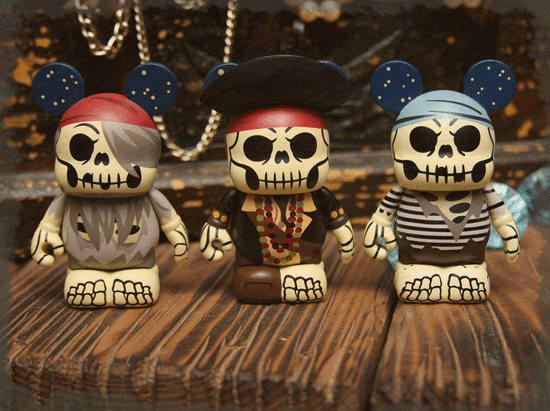 One detail me loves be th’ star-filled ears on each figure. For this detail, Casey was inspired by his first voyage on Pirates o’ the Caribbean at Disneyland years ago.

“The stars in th’ ears be reminding me o’ the feelin’ I get when ridin’ the attraction,” said Casey. “Me loves the illusion o’ feelin’ like I’m abroadside. The starry night effect be so convincin’. I also get that same feelin’ when visitin’ the Mexico Pavilion at Epcot. An’ based on yer preference, the ‘stars’ could be the fireflies from t’ openin’ scene in Disneyland.”

Me favorite characters be the three skeletons from the series. One figure be inspired by the “chess swashbuckler skeleton” that be playin’ the stalemate game in the queue line. The other two skeleton figures be from the Disneyland attraction – th’ bearded skeleton enjoyin’ some grog an’ th’ skeleton sittin’ atop the gold dubloons. Sorry – nay helmsmen skeleton this time (Casey sported a sly smile when he told me that news).

As ye be finished talkin’ to Casey, he handed me a dusty ol’ map. Excited, I leapt from th’ table t’ hunt fer buried pirate booty. Me e’entually found a very wee booty chest that contained th’ image above. Avast, do me one good eye deceive me or be that Captain Jack Sparrow, Blackbeard, Barbossa an’ Angelica from “Pirates of the Caribbean: On Stranger Tides?” Word be that they be released in 2012 as open edition figures. But me be sworn t’ secrecy so don’t tell ere.

Likes (0)
Share A Disney Vinylmation Pirates Life For Me, Says I