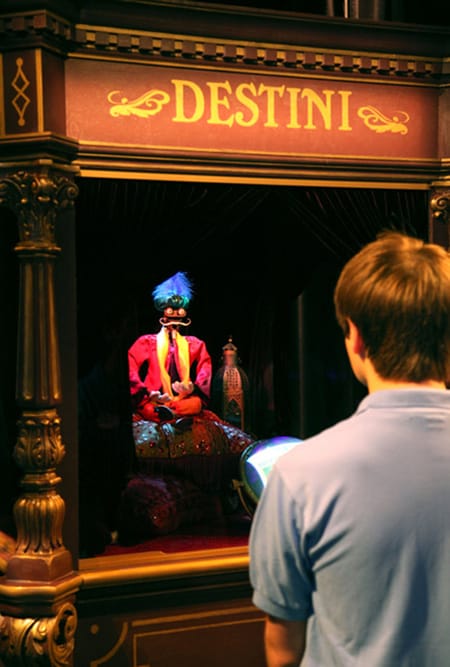 Something mystical was happening in a corner of the Parks & Resorts Pavilion at the D23 Expo in Anaheim last month. Guests gathered throughout the weekend to see Destini – fortune teller and Audio-Animatronics marvel.

“Many Audio-Animatronics characters appear in Disney Parks but they don’t really pay attention to guests,” said Scott Trowbridge, VP of Creative at Walt Disney Imagineering Research & Development. “This will change that.”

Destini uses new technology developed by WDI. He’s the latest and most advanced fully autonomous, interactive Audio-Animatronics figure – he can see you, hear you and even think for himself. Using sensors to observe and interact, he can see the guests in front of him – groups or individuals – and read their expressions. He can see whether you’re smiling or frowning, and adjust his interaction accordingly.

This technology would be used “anywhere we want characters to be more aware,” Scott said, but it is not meant to replace performers. Rather, it would allow WDI to bring characters to life that wouldn’t otherwise be possible. At the D23 Expo, guests got an exclusive peek behind the curtain to see how Destini works, but in the parks the technology will not be center-stage.

“We want guests to have the sense that they’re actually meeting a living, breathing character,” said Scott. “We hope that in the parks, guests will never know what is going on behind the scenes. They will just be having a wonderful moment, not thinking about the technology.”