Duffy The Disney Bear is Ready for Halloween at Disney Parks 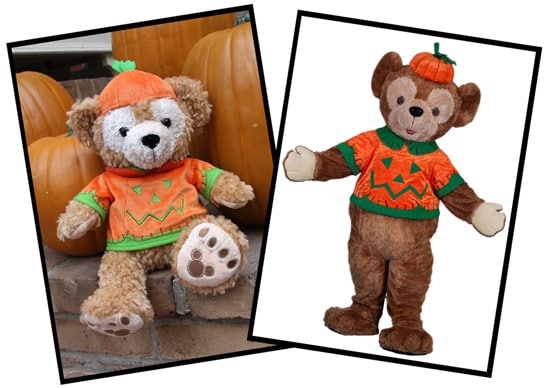 I’m still in the early stages of deciding which costume I’m wearing for Halloween this year (I need to be something different than a space cowboy). There is someone, however, who already has several costumes options for Halloween – my friend Duffy The Disney Bear. This fall, we are releasing several new pre-dressed bears and costumes for Duffy. I spoke with Monty Maldovan from Disney Design Group about his work on these new items.

“The twelve-inch Halloween pumpkin Duffy was inspired by a costume and a keychain that was released at Tokyo Disney Resort last year,” explained Monty. “We thought it was an adorable design. So we created the pre-dressed Duffy which was something not offered in Japan.”

The Halloween pumpkin Duffy is more than just a new plush bear; the outfit has inspired a new costume and visual overlay for Duffy’s meet-and-greet areas. At Disney California Adventure park, his meet-and-greet area will be turned into Duffy’s Pumpkin Patch starting in mid-September. At Epcot, Duffy’s meet-and-greet area near Mexico Pavilion will be decorated with fall décor starting at the beginning of October. Plus, Duffy will be at Mickey’s Not-So-Scary Halloween Party next to City Hall on Main Street, U.S.A., starting on Sept. 13. He will also make special appearances at the Halloween events in Disneyland park starting at the end of September. 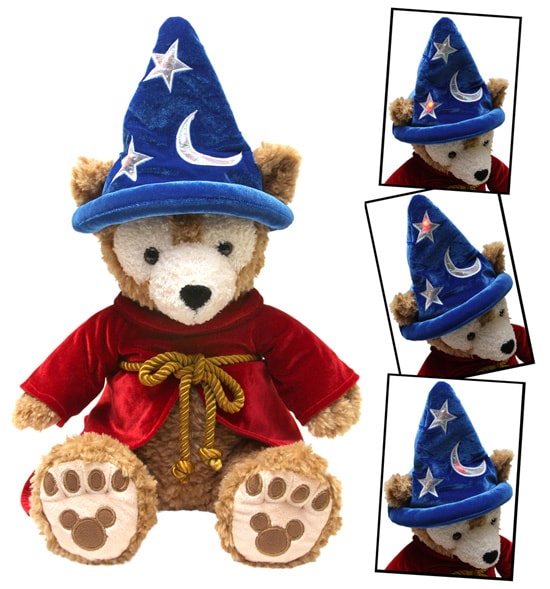 Besides a pumpkin, Duffy has a few more outfits being released in mid- to-late October. One of Monty’s favorites is the Sorcerer Mickey inspired costume for a 17-inch bear.

“I think the Sorcerer outfit is my favorite as it’s super cute,” continued Monty. “I love the way the stars and moon light up when you push a button on the back of his hat. The light up feature is something we have not used before on a Duffy outfit.” I think my favorite is the aviator costume for a 17-inch Duffy. I admit I had some fun creating the photograph above. Monty explained the outfit was a nod to an area at Disney California Adventure park.

“We have released many outfits that were inspired by Epcot,” said Monty. “We felt it was time to give some love to Disney California Adventure park, specifically the Condor Flats area. The goggles are my favorite feature. I wasn’t sure how they would look when designing the costume, but I’m thrilled how they turned out.” I wish I owned an airplane. If I did, I would fly to Aulani, the newly-opened Resort and Spa at Ko Olina, Hawai’i, this afternoon! We recently released a pre-dressed, 12-inch bear at the Resort. It’s the only place you can find it and the bear was one of the top items on opening day! Monty used “Duffy blue” for his board shorts and visor but gave them a washed out look (like Duffy had been enjoying the warm Hawai’ian sun and ocean all afternoon).

Since I don’t have an airplane, I will need to settle for my favorite event at Walt Disney World Resort – the Epcot International Food and Wine Festival (oh hurry up September 30 and get here!). For the festival, we will be releasing a 12-inch bear featuring Duffy in a chef outfit.

I would love to see how you are dressing your Duffy for Halloween. Feel free to share photos on Duffy’s official Facebook fan page.