How a Horse Becomes a Disneyland Horse: Getting Ready for the Show

We’ve already learned how a horse lands a job at the happiest place on Earth – so now we move on to how he gets ready for his role at Disneyland park. 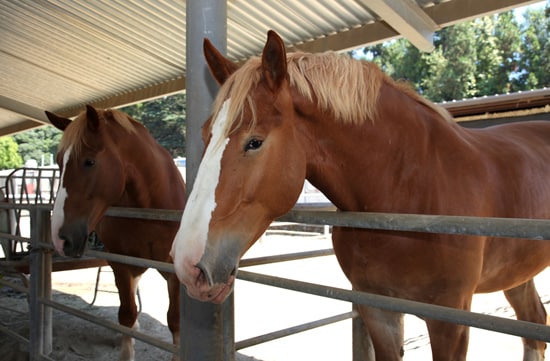 Once the horse is selected, his education begins at Circle D Corral. The two newest horses at the corral, Owen and Gus, are learning the ropes right now. When they are finished, they will have gone through approximately three to six months of training to get show ready, to get to know the Circle D cast and to allow the cast to observe their progress and interactions.

“Training here is very progressive,” says Alan Cooper, Equine Trainer Leader at Circle D Corral, meaning that once a horse achieves a training goal, he moves on to the next level – and only when he’s comfortable with what is being taught. Once the new recruit learns all he needs to know at the corral, it is time to get used to working in the park. He starts with trips around the perimeter of the park, getting used to all the sights, sounds and movement of backstage activity. When he’s ready, it’s time for dress rehearsals on the big stage: Main Street, U.S.A.!

In the last post of this series, we’ll learn how the new cast member gets ready for his big debut in the park.

Likes (0)
Share How a Horse Becomes a Disneyland Horse: Getting Ready for the Show