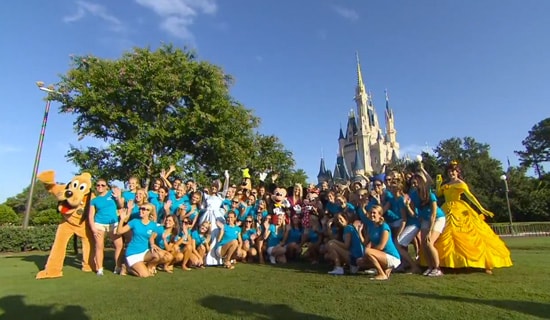 Look who stopped by Magic Kingdom Park. All 53 contestants for the title of Miss America 2012 – and current Miss America Teresa Scanlan – continued a Walt Disney World Resort tradition of walking down Main Street, U.S.A., and making some magical memories.

Representing fifty states, the District of Columbia, Puerto Rico and the US Virgin Islands, the women were greeted by Mickey Mouse, Minnie Mouse, Cinderella, Belle, Donald Duck, Goofy and Pluto. After group photos at Cinderella Castle, the women broke up into smaller groups to see the rest of Magic Kingdom Park and later in the day, visited Disney’s Hollywood Studios to ride the new 3-D “Star Tours – The Adventures Continue.” Here’s a look at some of the fun.

The 53 Miss America 2012 contestants also recorded interviews that are scheduled to appear in the pageant’s live telecast on ABC, Saturday, January 14.