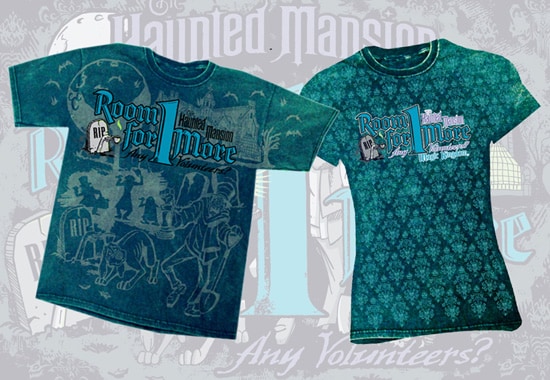 The first time I experienced The Haunted Mansion at Magic Kingdom Park, I didn’t see it. Before visiting Florida as a child, I had never been to a haunted house. Clearly, the delightfully unlivable mansion was too much for me back then since I only listened to that first ride. Today, the attraction is one of my favorites. My son and I recently visited there where we played in the extended graveyard queue and had a ball with the 999 happy haunts. This Fall marks the 40th anniversary of the attraction, and to celebrate, we are holding a merchandise event called “Room for 1 More” (we announced it via the Disney Parks Blog back in July). I caught up with Tyler Dumas, Disney Design Group Graphic Artist, to learn more about his work for that hauntingly awesome event logo.

“I’m a huge fan of The Haunted Mansion,” exclaimed Tyler. “For the logo, we focused on the graveyard caretaker since he would be the one eventually caring for that ‘one more’ volunteer. My fellow artist Brian Blackmore created the character sketch of him and his dog. I envisioned a grungy feel to the artwork, so I chose three or four dark colors and used a classic gothic font. I think the tee-shirts capture that grungy feel the best.”

You may recall Tyler’s work from another 40th Anniversary-related item earlier this past year – the Cinderella Castle collage. The “Room For 1 More” logo art is featured on a variety of items including a hat, messenger bag, tumbler and a timepiece. 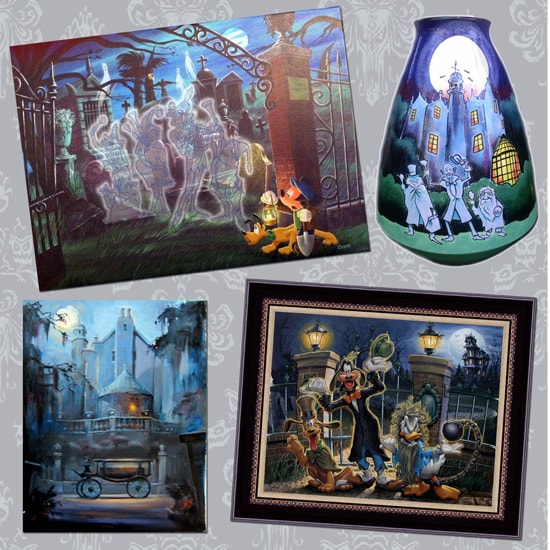 The logo merchandise is only a small sampling of unique merchandise created for this event. We have several well known artists who will be debuting items at this event including George Scribner, Greg McCullough, Elisabete Gomes, Dave Avanzino, Jim Shore, Robert Olszewski and more. I spoke with Disney Design Group artist Costa Alavezos, who you may remember from a recent article discussing those precious Disney Ear Hat holiday ornaments. Costa has created several items for this event but my favorite is titled “Graveyard Band.”

“I created an original work on an 18-inch by 24-inch canvas titled ‘Graveyard Band,’” explained Costa. “It took me about three- to four weeks to complete it as I would work on it a little each night at home. The graveyard is the scene I remember the best from the attraction, particularly the band that greets you at its entrance. There are so many amazing things to see in that part that I wish the ride would slow down [laughs].” There will also be some unique collectible one-of-a-kind Vinylmation figures designed by Noah, Miss Mindy (who recently had two incredible figures at the D23 Expo), Monty Maldovan and Quynh Kimball. I also love the collectible (and reversible) Disney Ear Hat that comes with both a pin and Vinylmation 3-inch figure. 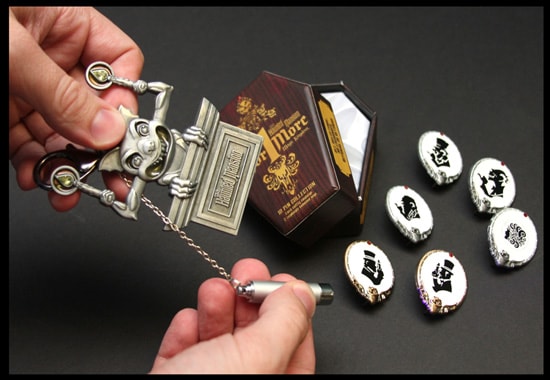 Speaking of pins, there will be a unique feature to several of them that uses a black light (something that was a hit for the pins celebrating the 40th Anniversary of The Haunted Mansion at Disneyland in 2009). There is a lanyard medal featuring a gargoyle from the stretching room that contains a black light attachment. When shined on certain pins and packaging, the light will reveal hidden things (Tyler mentioned to look for three ghosts who like to follow people home).

The best news I have to share is that, like the name of the event implies, we still have “room for one more” guest. If you’d like ticket information or to see more of the unique items created, please visit ArtofDisneyParks.com. Any volunteers?