On Sunday, we hosted the sixth annual Disneyland Half Marathon at the Disneyland Resort. I joined more than 15,000 athletes on the race course to bring you the following report (and to earn my first Coast to Coast Challenge medal). I’m no Paul Hiffmeyer, but I hope you’ll enjoy some shots that I took along the way.

In the pre-dawn starting area, amid all the bouncing, anxious athletes, I found a group of Team in Training participants from the San Diego/Hawai`i chapter of the Leukemia and Lymphoma Society. Team in Training participants raise funds for the society while training to complete endurance events. At the race, I spoke to Sue, who was running her first half marathon, and Kendra, who was completing Disney’s Coast to Coast Challenge – a special award for completing runDisney events at both Walt Disney World and Disneyland Resorts in the same calendar year.

“I’m in it for the bling,” said Kendra. And who could blame her? The finisher medals are pretty awesome. 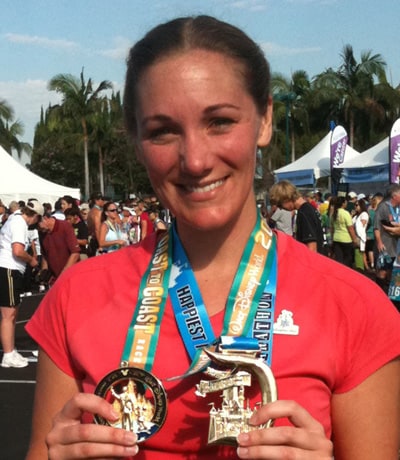 At the start line, fireworks marked the beginning of the race as the athletes stepped onto the course. Drew Carey and 2010 Disneyland Half Marathon female winner Rachel Booth were among those in the crowd, along with Judy and Denise – two ladies from San Diego dressed in sparkly Minnie Mouse costumes.

When I asked them what they liked best about runDisney events, their answer was a resounding “everything!” Judy said that she likes the Disney characters, the fireworks and the energy.

“It’s kind of empowering. There’s a can-do attitude,” she said. And Denise added, “Everyone feels like a kid at Disneyland. You get to dress up and have fun.”

There was no shortage of costumes on the course – hundreds came dressed as their favorite characters. I saw plenty of princesses and Tinker Bells – and even a trio dressed as Woody, Jessie and Buzz Lightyear. 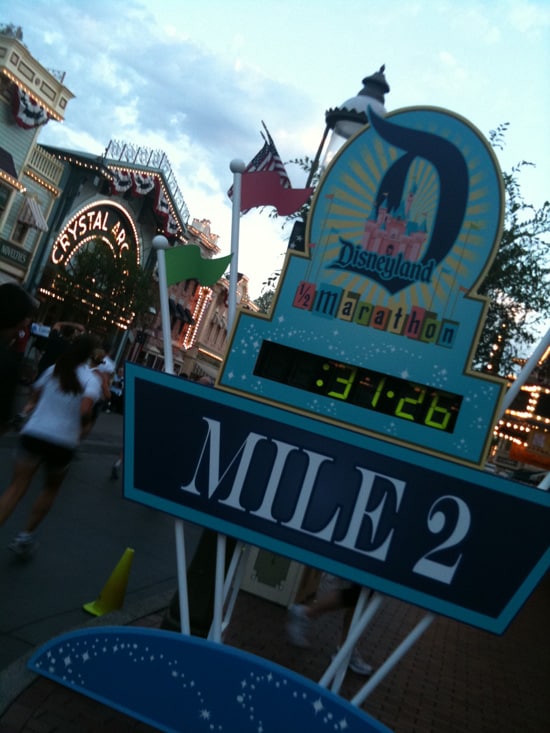 After running through Disney California Adventure park, we headed into Disneyland park as the sun was rising. We spotted plenty of Disney characters, but my favorite moment was seeing Princess Aurora riding King Arthur Carrousel with Flora, Fauna and Merryweather just before we ran through Sleeping Beauty Castle. 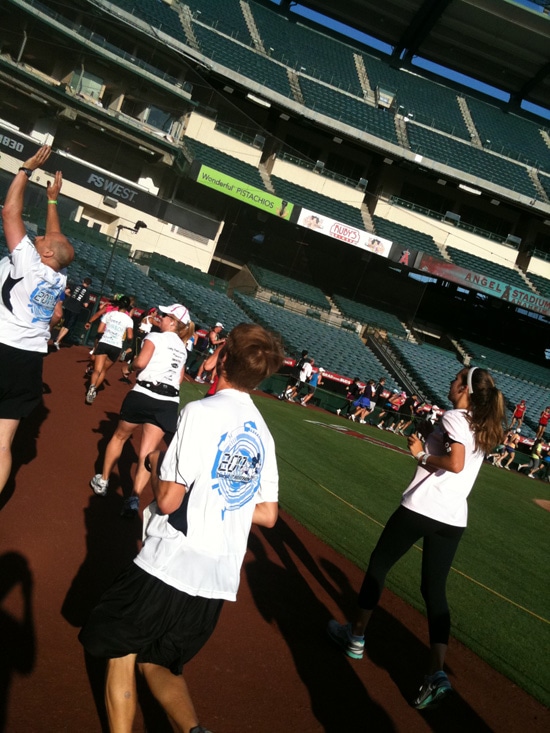 The course then left Disneyland Resort and headed out to Angel Stadium. Racers got to step right out onto the field and round home plate. As we left the stadium, I stopped to chat with Dawn, a first-time race volunteer handing out drinks at an aid station just outside. Dawn and her 13-year-old son, Bryce, woke up at 3 a.m. that morning to make it to the race from Corona, Calif. Despite the early morning, Dawn said they both agreed they’d volunteer for a runDisney event again.

“It’s awesome event,” she said. “It’s a lot of people – amazing to see. It’s inspiring.” When I asked Dawn what her favorite part of volunteering for the race had been, she said, “knowing you’re doing something good – giving back.” 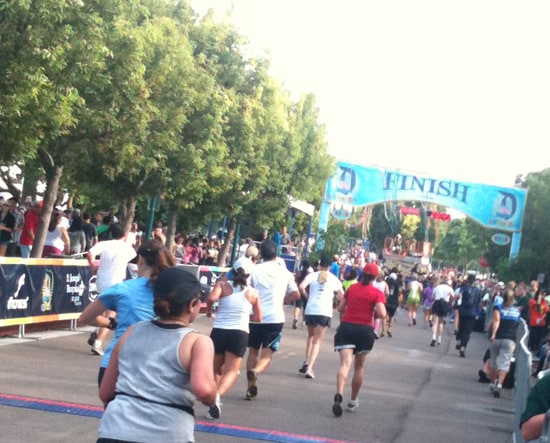 After 13.1 miles, I crossed the finish line to the clank-clank of finisher medals hanging from my fellow athetes’ necks. I want to send a special congrats to my fellow Disney Parks Blog author, Betsy Sanchez, who completed her first half marathon Sunday. And congratulations to everyone who completed the 2011 Disneyland Half Marathon!