One of Ireland’s most popular bands, Na Fianna, will perform nightly at Raglan Road at Downtown Disney at Walt Disney World Resort through Oct. 1. 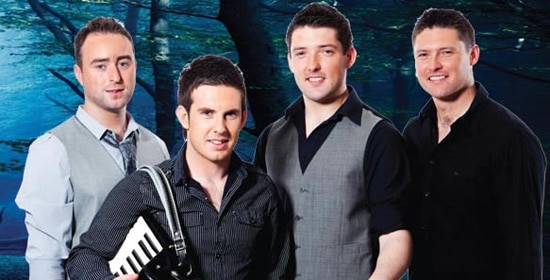 This four-piece traditional/ballad group performs music that’s enhanced by mandolin, accordion, guitar and bodhrán. Their nightly repertoire features a wide variety of songs from “Galway Girl” to the “Rocky Road to Dublin.”

Na Fianna rose to fame in 2009, when the group appeared in the “All-Ireland Talent Show” television talent competition. After four live television performances to a viewing audience of 700,000, the band finished in second place out of more than 6,000 competitors.

Na Fianna will perform Monday-Thursday at 7 p.m., and Friday-Saturday at 8 p.m.

Don’t forget that this weekend, Raglan Road will hold a special “Half Way to Paddy Day” celebration that will feature the music of Na Fianna and the popular U-2 tribute band Elevation, Irish dancing, competitions, and more.