What’s My Line? Can You Place These Disneyland Resort Attraction Quotes? 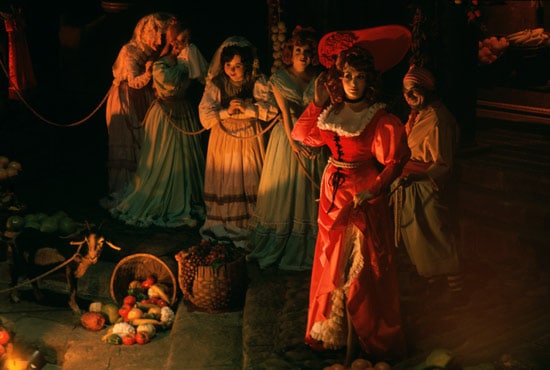 We’ve been having fun quizzing you on some of our favorite Disney Parks attractions quotes. But it got me thinking – who comes up with these quotable lines? So I asked Dave Fisher, a writer at Walt Disney Imagineering, who has written for such attractions as “Circle of Life” at Epcot, Pooh’s Hunny Hunt at Tokyo Disneyland and Jungle River Cruise at Hong Kong Disneyland. Right now, he’s working on story treatments, writing copy for graphics, refining and recording rider instructions and providing dialogue for background audio for Buena Vista Street at Disney California Adventure park. He happens to have written my personal all-time favorite quote from a Disney Parks attraction, but we’ll get to that later.

“The great thing about being a writer at Walt Disney Imagineering is that we write for everything: lands, attractions, shops, restaurants, resorts, cruise ships,” Dave told me. “It’s all about story and that’s how every project begins.”

Dave went on to tell me even more about the process of writing for an attraction in the Q&A below. But first, let’s test your memory with some more “What’s My Line?” quotes:

And now, the rest of my chat with Dave Fisher, writer at Walt Disney Imagineering.

When does the show writer become involved in the creative process of an attraction?

Writers are usually involved in the creative process right from the start because everything we do at Walt Disney Imagineering derives from story. The story treatment, usually a one- or two-page document that provides the setting and context for a land, attraction, shop or restaurant, is a key step in the creative process because it informs the design and development of the architecture, landscaping, graphics, interiors, music and dialogue, sets, characters, even the costumes worn by cast members.

How do you make the story fit the ride element of the attraction?

In a perfect Disney world (pardon the pun), the story comes first and remains the most important aspect of the design and development process. As proud as we are of the cutting-edge and breakthrough technologies that have been invented, developed or refined at Walt Disney Imagineering over the years, they are storytelling tools for us. They give us the opportunity to tell compelling stories in new, innovative and often thrilling ways.

Is the process of writing for an attraction the same as it is for writing a show?

Writing for an attraction is a unique challenge in that you want the experience to remain as visual and visceral as possible. It may seem kind of strange for a writer to say this, but we want to tell our stories and create our environments with a minimum of dialogue. Ideally, the story unfolds through a series of visual cues that forward the action seamlessly and almost subconsciously. If we have to rely too heavily on dialogue to keep our guests in the story, we need to rethink our approach.

When you’re writing a script, can you tell which lines are going to be the most quotable? Can you give an example from an attraction you’ve written for?

I don’t think we as writers ever start a script with the intention of creating a line that could become a catchphrase. Certainly we spend a lot of time polishing our scripts – and we often have multiple writers providing input – but I think the most effective dialogue is that which sounds natural and unforced (unlike that last sentence). If a line captures the fancy of guests, so be it, but it’s not something we’re consciously trying to do. I think we just to write stuff that is appropriate and/or fun. For instance, in “Circle of Life” at the Land in Epcot at the Walt Disney World Resort in Florida, we were keeping a scene from the previous film, “Symbiosis,” in which the camera pulls back from a Native American on horseback to show the Glen Canyon Dam. It just seemed natural to me to have Pumbaa say “Dam!” followed quickly by Timon admonishing him with “Hey, watch your language, Pumbaa!” To which Pumbaa replies, “No, Timon, look…”

What is your favorite quote from a Disney Parks attraction?

This is like asking me who I like more, my mom or my dad? Or which of my kids I like best. Yeah, yeah, that sounds like a cop out, but all writing is precious and I don’t want to insult any lines of dialogue by saying one is better than the others. Other than that, “We wants the redhead.”

UPDATE: How did you do this time?

Likes (0)
Share What’s My Line? Can You Place These Disneyland Resort Attraction Quotes?