While I enjoy experiencing the magic and wonder of our theme parks and resorts, I especially enjoy talking to our guests and hearing stories of how a little “Disney magic” pixie-dusts their own lives.

I met Steve Hood on October 1 during the Walt Disney World Resort 40th Anniversary ceremony in Magic Kingdom Park. Arriving early to the park that day, Steve had a front-row seat for the ceremony. As fellow cast members and I chatted with him, we soon learned that he and his family have a very special tribute to Mickey Mouse in their backyard in central Indiana. 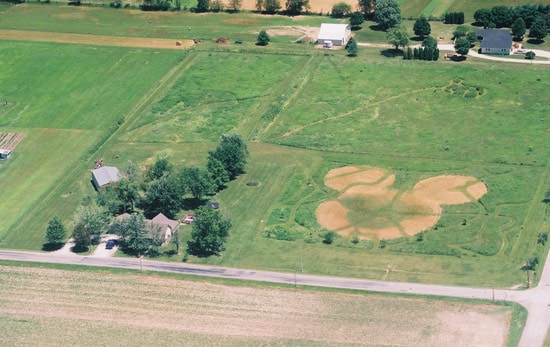 Cut into the lush grass in the field behind the family home is the familiar silhouette of Walt Disney’s favorite character. Steve said he mowed these giant circles into the field about three years ago (approximately when this photograph was taken) and reports that it is still growing and flourishing. A friend then piloted Steve and his family members in a plane so Steve could capture this image.

In fact, look closely into the larger Mickey Mouse silhouette and you’ll spot a smaller, green one. Steve said that was the first Mickey Mouse head he mowed before deciding to create the larger tribute. (You might even call that first one a “Hidden Mickey” in this very unique set of crop circles.)

Steve first visited Magic Kingdom Park in 1979. “I have been hooked since,” he said, “and it was really something to see all the parks and Walt Disney World Resort grow into what it is today.” He, his wife and their five children now visit as often as they can, but between visits they can get a little pixie-dusted by just walking out on the back porch. “Having this Mickey in our field is one way we can keep Disney in our lives every day, even over 1,000 miles away.”

Do you have any special reminders in or around your home that can bring those pixie-dusted feelings to you and your family? If so, please let us know in the comments.