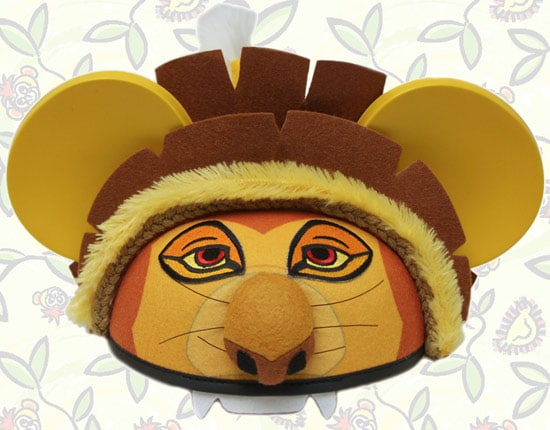 By now, you probably have heard the morning report that Disney’s 1994 animated classic “The Lion King” has arrived on Disney Blu-ray and DVD. I recently picked it up on Blu-ray and it looks incredible in my home theater! With this Diamond Edition release, I thought it was time to highlight some new Lion King items that have recently arrived at Disney Parks.

One of my favorite shows at Disney’s Animal Kingdom is “Festival of the Lion King” (it’s the giraffe section for me). As a salute to this show, the Disney Ear Hat team recently introduced a location specific hat to Disney’s Animal Kingdom (meaning you’ll currently only find it at that park). It is similar in design to the popular Disney Character ear hats I first told you about in late August 2011. 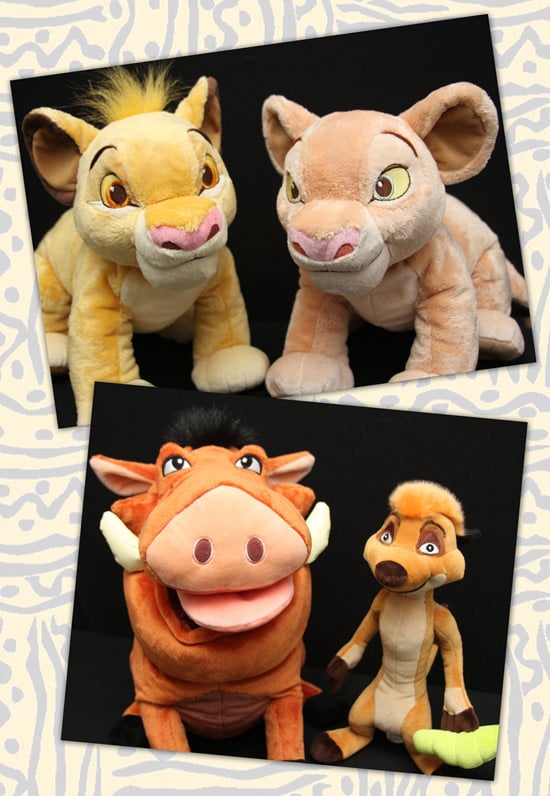 Denise Edelmaier, product developer for dolls and plush, showed me seven new Lion King character plush. There are the familiar favorites like young Simba, young Nala, Timon, Pumbaa and Rafiki. They also released a giraffe (yes!) and a zebra. As I photographed several of the plush, I was amazed at how soft and cuddly they were (especially Simba and Nala).

As Denise and I were talking about the new plush, she told me a story I couldn’t resist sharing.

“I was on a location walk at Magic Kingdom Park and saw something that reminded me of why I do what I do. I was in the Emporium looking at a wall of plush. I spotted a little girl off to the side with a baby Simba in blanket plush we carry. As I watched her, she raised baby Simba over her head like she was Rafiki from the movie. After seeing that moment, I was reminded of how the things I create can connect with my guests.” 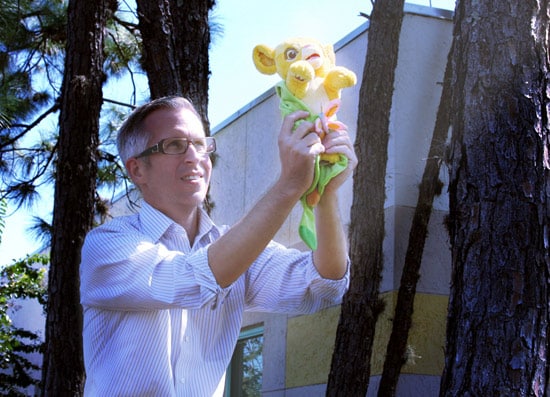 I have to admit – her story inspired me to run outside our merchandise development headquarters. Come on, I know I’m not the only one doing this at Disney.

The final items I have to share are from the Disney Movie Rewards team. If you have purchased a recent DVD or Blu-ray in the past five years, you may have seen advertisements for them. I recently joined after purchasing “Tron: Legacy” this past April (the version with the 3-D disc, Blu-ray, DVD and digital download complete with light-up identity disc, of course!) Since I’m a member, I can now order The Lion King pin set featured in the image below. 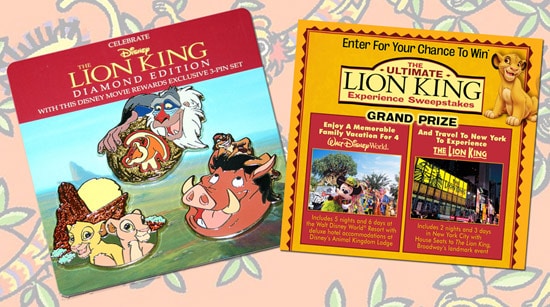 But the item that really caught my eye is a sweepstakes they are currently offering where the grand prize includes a trip to Walt Disney World Resort with a stay at Disney’s Animal Kingdom Lodge and a trip to experience “The Lion King” on Broadway in New York City. Wow! See the Disney Movie Rewards website for all of the details on both the pin set and the sweepstakes.

As the sun sets on this Disney Parks Blog post, I’m curious to hear about your favorite scene from “The Lion King.” My favorite scene is where Mufasa (oh, say it again – “Mufasa”) explains to a young Simba the great circle of life. I guess it touches my heart even more being a father now.