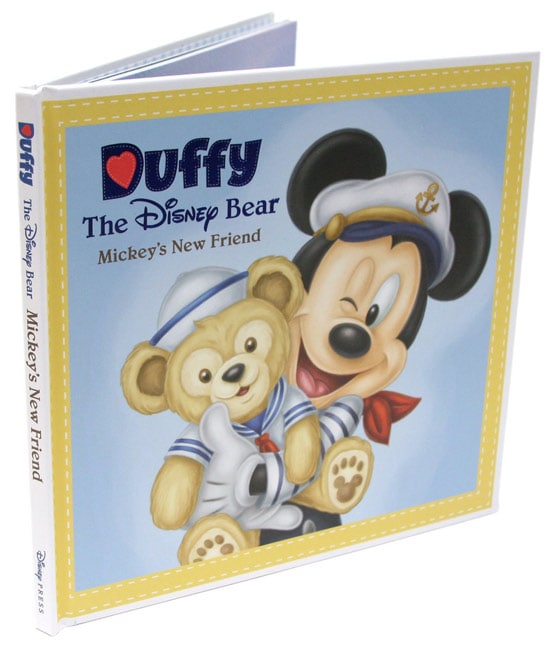 There is a bedtime ritual that takes place each night with my son. After he brushes his teeth, he selects two storybooks for me to read. I love reading to him, which is probably a result of my mother reading stories to me as a child. Soon, we will have a new bedtime story when a book about Duffy the Disney Bear arrives at Disney Parks on October 14. The book is titled “Duffy the Disney Bear, Mickey’s New Friend,” and it was inspired by stories first introduced at Tokyo Disney Resort. The book was written by Jessie Ward from Disney Publishing in New York with illustrations by Monty Maldovan, an artist from Disney Design Group in Florida. You may recall that Monty has also designed many of the costumes and bears introduced at Disney Parks. I spoke with Monty whom I recently discovered reading the new storybook to several of his friends. 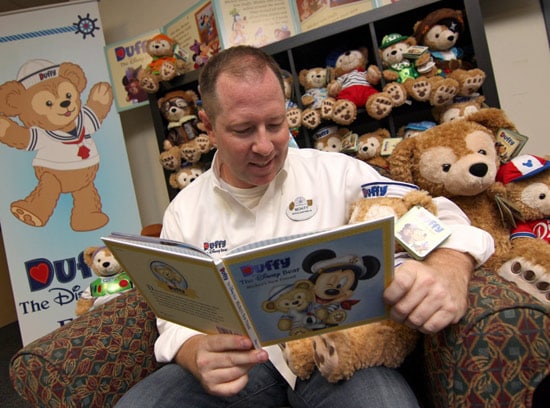 “This was the first time I’ve ever provided illustrations for a storybook,” explained Monty. “I recall my mother reading stories to me as a child, so I was pretty excited to work on this project. It took me about two months to create the hand drawn illustrations used in the book. I then worked with an artist named Robert Vann who added a watercolor texture effect to each illustration. I think my favorite image is found on pages 8 and 9 where Minnie Mouse presents Mickey with his Duffy. I love the colors in the image. When drawing the characters, I prefer to make them big and up close which is exactly like this image.” 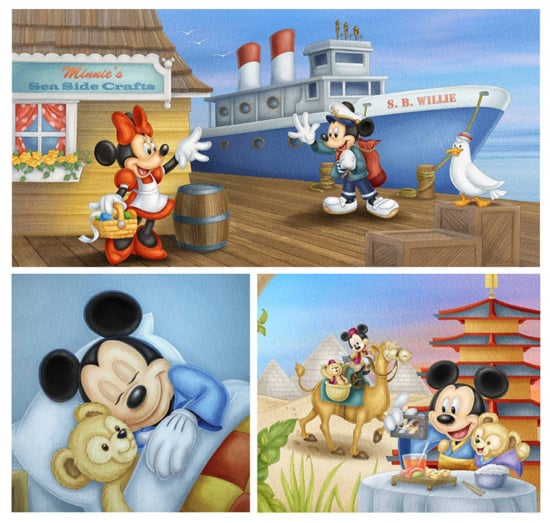 The thing that most impressed me was the number of illustrations Monty created; the book has 32 pages! I was fortunate to speak with Jessie Ward via the telephone from New York about her work on the book.

“I used stories that were featured on product hangtags in Tokyo Disney Resort as the basis for the story,” said Jessie. “I have written other books for Disney Editions but this is my first story about Duffy. While writing it, I thought of my experiences as a child. I often spent time on the water with my parents and liked to bring along a doll as a companion. I liked the idea of Mickey and Duffy having adventures together, especially since Mickey was a sailor like I am. I even added some humor when Mickey and Duffy tried new foods.”

To celebrate the release of this book (and the fact that Duffy has been in the United States for a year), we are holding a special meet and greet with Monty at Epcot on October 14. He will be signing books from 11:00 a.m. to 1:00 p.m. at the Disney’s Traders in World Showcase near Mexico Pavilion. Once you meet Monty, you can also meet Duffy in his new Halloween attire across the promenade, and enjoy the Epcot International Food and Wine Festival (you know where I will be).

We also have a special treat for Passholders in Florida on October 14. We have created a t-shirt for a 17-inch Duffy the Disney Bear. In Florida, the first 750 Passholders who present a valid annual pass at Disney’s Traders in Epcot will receive this shirt. There is a limit of one shirt per Passholder with valid annual pass, and Passholders must be present in order to receive the shirt. All shirts available while supplies last.

Stay tuned later this week as my fellow author Michelle Harker will have details about the 17-inch Duffy Bear shirt give away for Passholders at Disneyland Resort.

Finally, I have great news for anyone looking to get this storybook or other select Duffy items via the Internet. A new Duffy the Disney Bear boutique recently launched via the Disney Parks online store with a variety of items including bears, costumes, pins and more. The new storybook will also be released via the online store .

If you are in Florida, I hope to see you on October 14 at Epcot. Be sure to bring your Duffy the Disney Bear.