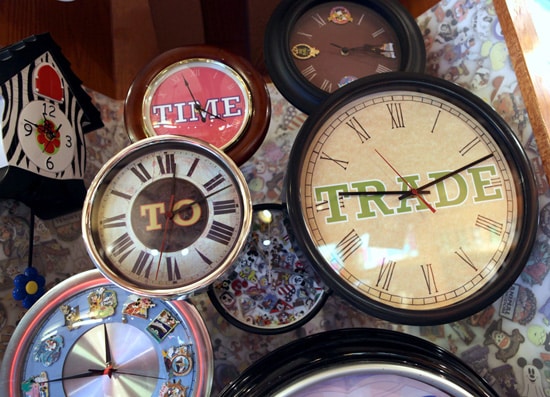 I vividly recall the grand opening of Disney’s Pin Traders at the Downtown Disney Marketplace. I remember it well because I assisted with the grand opening celebration while serving as a Walt Disney World Resort Ambassador. The location, once known as the Captain’s Tower, was considered an icon for the shopping village that opened in 1975. As the excitement of Disney Pin Trading continued way beyond the original 15-month Millennium Celebration plan, there was a need to have a flagship pin location outside a Disney Theme Park. Downtown Disney seemed like a natural choice, so Disney’s Pin Traders was introduced in Summer 2002. Recently, some new visual enhancements were added to the location. I spoke with Julie Young, product developer for Disney pins, to learn more.

“As [pin trading] entered its eleventh year in October 2010, we felt updates were needed to various visuals used throughout the category,” explained Julie. “The first thing we did was introduce a new logo for Disney Pin Trading. The logo was used on packaging, collateral and individual back stamps of pins. The enhancements to Disney’s Pin Traders were a natural second step as the location is one of the most popular pin destinations at Walt Disney World Resort.” 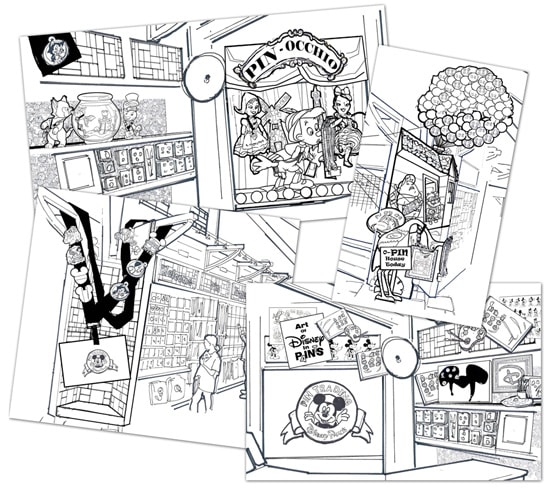 The Disney pin team contacted Joe Higham, a talented cast member with the Global Retail Development team and recent Walt Disney Legacy Award recipient, to outline their ideas. His job was to take their dreams and turn them into concept sketches. I spoke with Joe about the process of creating the new in-store visuals.

“After meeting with the Disney pin team, I drew a series of sketches by hand,” said Joe. “For the drawings, I used a variety of art sources including images of pins that had been previously released. We wanted something playful similar to other locations that use merchandise as visual displays such as Tren-D or D-Street.” 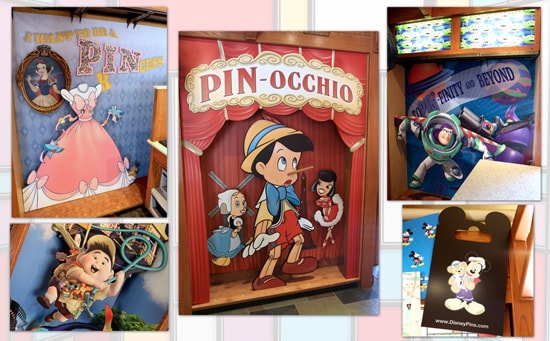 Once Joe completed the first set of sketches, he shared them with leadership and with representatives from Walt Disney Imagineering. As a natural part of the design process, there were some modifications made after initial reviews. Yet, Joe said that there was one thing that all partners liked.

“Many partners, including Walt Disney Imagineering, really liked the various puns used in the vignettes,” continued Joe. “We built some fun visuals around puns like ‘To Pin-Finity and Beyond’ and ‘I Want to Be a Pin-cess.’”

I think my favorite one is the “Time To Trade” vignette that uses clocks and Cogsworth to explain how pins are traded at Disney Parks (I do love time!). 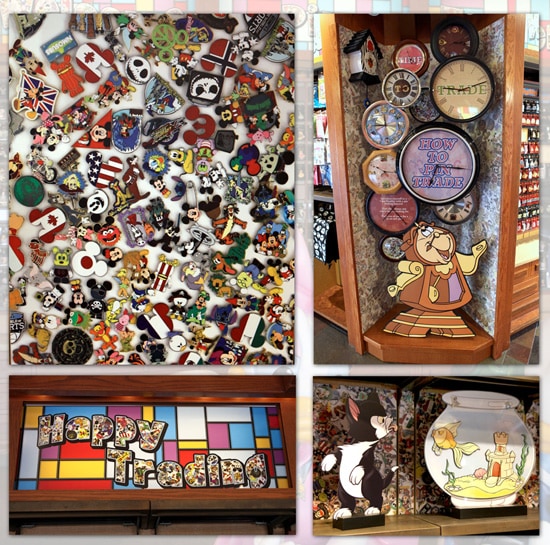 The one thing I was most excited to see was the pin collage image used throughout the store. The Disney Pin Team assembled the collage by mounting pins into a white foam board. I then photographed the collage and shared the images with the art team. I had not seen the final result until I visited the location. I guess Disney’s Pin Traders and I have a special bond, especially after being at the grand opening and later serving as Project Manager for Pin Trading for seven years. I have good memories from that chapter in my Disney career. Julie shared that memories are a key ingredient to the Disney Pin Trading experience.

“I develop memories,” smiled Julie. “Everyone has a favorite Disney character, attraction or show. Pins have become a perfect way to remember favorite moments from Disney experiences. Every time someone looks at a pin I develop, I hope she or he will remember happy times.”