Ever glance at that big Train Bulletin on the inside east wall of the Main Street Train Station in Magic Kingdom Park? Some of you probably guessed that the arrivals and departures have historic Disney connections. 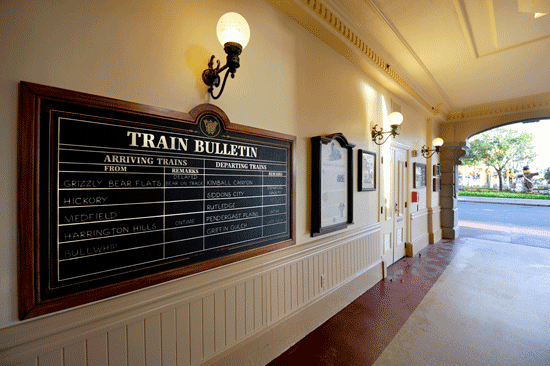 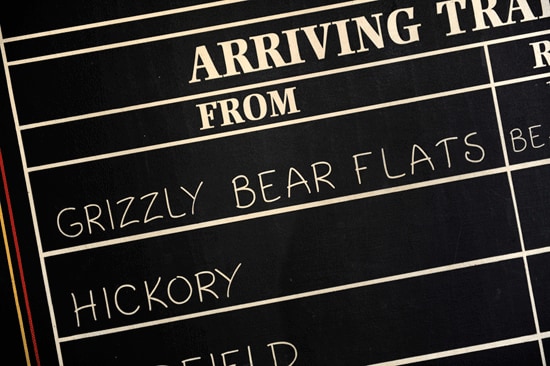 The remaining listings are each a nod to classic live-action Disney movies, all of which share a small town, early 20th century setting not unlike Main Street, U.S.A. In the film Follow Me, Boys!, Fred MacMurray played Lem Siddons, who settled in the town of Hickory.

The next one is easy for Kurt Russell fans: Medfield was the college where Dexter Riley’s wacky experiments always saved the school in three comedies starting with The Computer Wore Tennis Shoes – and it was also the college where Fred MacMurray, as The Absent-Minded Professor, used “Flubber” to win a basketball game against rival college, Rutledge. Dean Jones ran for District Attorney of the town of Medfield in The Shaggy D.A. and Robin Williams saved its college in his Flubber remake. 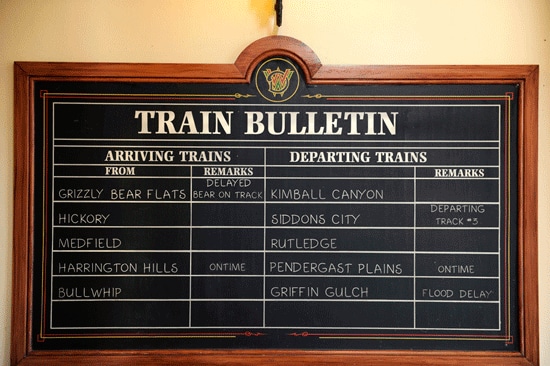 Special Oscar-winner Hayley Mills might be so very “glad” that you recognized “Harrington” as the last name of Pollyanna’s Aunt Polly (Jane Wyman, also an Oscar winner). The town is named for her very prominent family. And Mr. Pendergast (Adolphe Menjou) was the mean old recluse who turned out to be a kind-hearted adoptive father to Jimmy Bean (Kevin “Moochie” Corcoran).

Last but not least, The Adventures of Bullwhip Griffin starred Roddy McDowall as an English butler who finds himself in the wild west.

Feel free to point these out to amaze and dazzle your friends and family!

See the posts below for more “Sights & Sounds at Disney Parks”: