From Walt’s boyhood hometown to an animation celebration, D23—Disney’s official fan club—is making 2012 a fan-tastic year with more unique immersive experiences than ever before – events we know passionate Disney enthusiasts will enjoy. 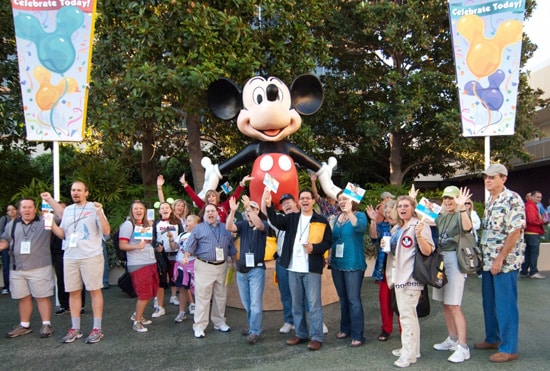 We’re sure many of you have seen the famed “Partners” statue with Walt and Mickey at one of the Disney parks. If you look closely at Walt’s tie you will see the letters “STR”—that stands for Smoke Tree Ranch, an exclusive Palm Springs resort Walt called “my own laughing place.” And January 23 – 25, D23 Members will have a chance to experience this retreat the way Walt did during the “Smoke Tree Ranch Roundup” with three days of screenings, presentations, activities and delectable meals, all while staying in a Smoke Tree Ranch cottage.

If you have ever visited the “One Man’s Dream” attraction at Disney’s Hollywood Studios (Presented by D23) then perhaps you enjoyed learning about Walt’s early years in Marceline, Missouri? This March, D23 will take members on a Journey to Marceline for full-day experience seeing the town that partially inspired Walt’s creative vision for Main Street, U.S.A.

This spring will see the debut of a new event called D23 Fanniversary Celebration, a series of cross-country events marking over 40 magical milestones in Disney’s rich history from attractions and theme park openings to live-action and animated films and beyond. Disney fans will be able to join the “celebration” in Los Angeles, San Francisco, Chicago, Boston, New York and Orlando.

Speaking of anniversaries, in March D23 will celebrate its third anniversary with a special event at Disneyland park followed by Destination D: 75 Years of Disney Animation which will be held at the Disneyland Resort this August honoring the diamond anniversary of Snow White and the Seven Dwarfs and Disney feature animation. At Walt Disney World Resort, D23 will celebrate Epcot’s 30th anniversary and fan favorites like the holiday tradition Magic & Merriment will return along with Sip & Stroll, which in 2012 will get a Halloween twist and become Sip & Scream!

Want more? Well, there’s the new screening series From the Vaults at the Walt Disney Studios, which brings beloved live-action films from the past back to the big screen, like Newsies, Sister Act and Treasure Island. The 50 and Fabulous screening series returns, as do D23’s signature tours of the Studio and Walt Disney Archives—which will double in capacity!

And that’s just the beginning! Look for even more events to be announced in the upcoming months as D23 continues to create one-of-a-kind events for Disney fans.