With a gift perfect for Thanksgiving, Walt Disney World Resort delivered some special bushels of green yesterday to Second Harvest Food Bank of Central Florida as part of ongoing efforts to help local families in need. 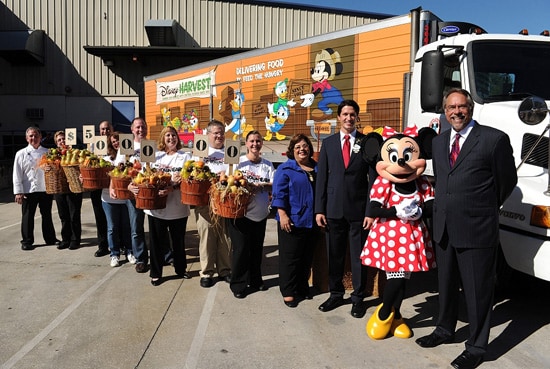 Minnie Mouse, joined by Disney VoluntEARS, gave $500,000 to assist Second Harvest in its “Building Solutions to Hunger” campaign. Due to a record level of demand for its services, Second Harvest needs to build a larger facility so it can accept and distribute significantly more food throughout the community.

In addition to the funds, Disney pledged 20,000 pounds of fresh produce to the organization during the next year. This is on top of the ongoing Disney Harvest contributions, which totaled nearly 360,000 pounds of food in 2010.

Now in its 20th year, Disney Harvest collects excess prepared and unserved food from locations throughout Walt Disney World Resort and delivers it to Second Harvest.

Donations range from salad to filet mignon and help feed more than 1,000 local kids a week.

Watch the video to learn more.