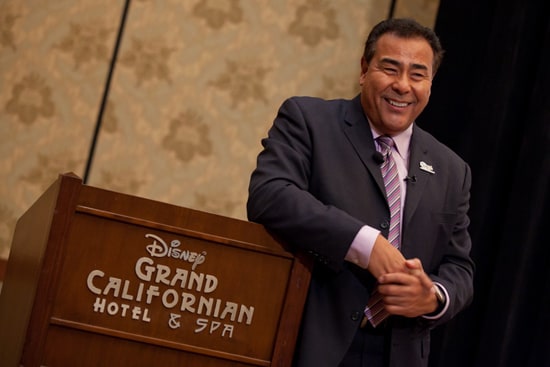 Earlier this week, ABC News Correspondent John Quiñones shared his compelling story about the road from growing up in a San Antonio barrio to becoming an award-winning journalist with members from a Disneyland Resort diversity resource group, HOLA (Hispanic Organization for Leadership Advancement).

Quiñones, who grew up picking tomatoes and cherries with his family, told the audience to do whatever it takes to take hold of their dreams. It may have seemed unlikely that he would become a co-anchor for ABC’s “Primetime,” but it was his perseverance and drive that made him succeed.

His storytelling includes political and economic turmoil in Argentina and civil war in El Salvador. One anecdote that stood out for many in the audience was that he aims to shine a light where there is darkness by speaking to the “moved and shaken” rather than the “movers and shakers.”

Quiñones refers to his latest project, the “Primetime” series “What Would You Do?,” as a candid-camera of ethics, capturing people’s reactions when confronted with real-life dilemmas including topics such as racial profiling and elderly abuse.

Quiñones had a great story to tell and I believe we all took away something important from hearing his life story. It’s events like these that make our diversity resource groups exactly that – a resource to the company and to our cast so that we may teach each other what it truly means to understand the impact of valuing diversity.