In February, we shared a video that showcased one of the amazing crops growing at The Land Pavilion in Epcot – the aptly named “Nine Pound Lemons.”

It’s a variety of lemon that is capable of growing to a much larger size. So, fruit harvested from the Nine Pound Lemon trees usually will grow to a whopping size of about nine pounds.

In that video I chatted with one of The Land Pavilion’s scientists, Les (a.k.a. the ”Prince of Produce”), about how citrus and science combine in this unique fruit to entertain and educate guests on the “Living with the Land” boat ride attraction and in the “Behind the Seeds” backstage walking tour. And despite the giant size of the Nine Pound Lemons, I discovered they are quite tasty and yield a lot of juice. 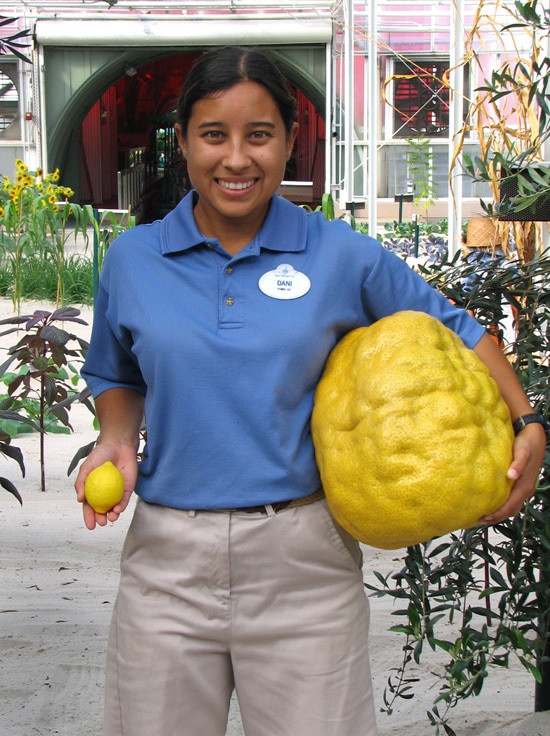 We’re back this week with some exciting news from The Land. The team at the attraction’s living laboratories recently harvested their largest lemon yet from the Nine Pound Lemon trees. This lemon weighed in at a whopping 15.05 pounds, a record for The Land and its experimental greenhouses. And, a second lemon harvested from the very same tree weighed 12 pounds.

While they certainly outdistanced their descriptive name, these two Nine Pound Lemons quickly became citrus celebrities at The Land. In the photo above, Dani, one of the Plant Science interns in charge of the greenhouse where the lemons grow, holds the 15+-pounder in one hand and a “normal-sized” lemon in the other.

In fact, these two lemons even outweighed the “World’s Heaviest Lemon” currently listed on the Guinness World Records website. That pucker-producer, grown in 2003 on a farm in Kefar Zeitim, Israel, weighed in at 11 pounds, 9.7 ounces, which still stands as the official record.

Let us know in the comments if you’ve seen the Nine Pound Lemon trees in the greenhouses or if you have another favorite part of the “Living with the Land” attraction and the “Behind the Seeds” backstage tour.