On Wednesday, Nov. 23, 2011, if you hear a loud “CRASH!” followed by riotous laughter, it may be because Disney’s The Muppets has arrived at your neighborhood movie theater. The new comedy spectacular stars Jason Segel, Amy Adams, a “who’s-who” of celebrity cameos – and of course, Kermit, Miss Piggy, Fozzie and a gaggle of other madcap Muppets – on a cross-country search reuniting the ol’ gang.

Disney’s The Muppets production designer Steve Saklad (Spider Man 2) told us that the new movie straddles the real world and what he and director James Bobin (writer/director of TV’s Flight of the Conchords) call a world of “Muppety-ness.” “James and I pin-pointed what makes something ‘Muppety;’ it will have have a richer color palette, a sense of period. We really wanted to capture the spirit of the original TV show and the traditions of American comedy.”

Disney’s The Muppets was made for fans, by fans. Thanks to star/co-screenwriter Segel, director Bobin and other Muppetphiles, the movie brims with “inside” jokes and clever references. “James can cite almost every scene in every Muppet TV show and movie, at a moments notice,” said Steve. “The new movie is peppered with Muppet lore from top to bottom.”

As a top Hollywood production designer, Steve appreciates the artistry of Disneyland Resort. “Each new iteration has been an amazing dream come true – New Orleans Square, Tomorrowland – there are so many great ideas that keep coming through.”

Steve’s also blown away by Walt Disney World Resort Theme Parks. “I think if I had to pick one favorite, it would have to be Epcot. The presentation of the different countries is so full of wit, so full of magic. I love the idea of taking the essence of each nation and presenting it in its own ‘space.’ As I walk through those streets, I also feel as if I’m walking on what might be Mary Poppins’ street in the United Kingdom Pavilion or a street from Ratatouille in the France Pavilion. It’s like crossing over into the movie world – a fantasy version of these places.”

And of course, you can cross into the wacky world of The Muppet Show – so lovingly celebrated in Disney’s The Muppets – by experiencing the uniquely immersive Muppet*Vision 3-D attraction at Disney’s Hollywood Studios and Disney California Adventure park. 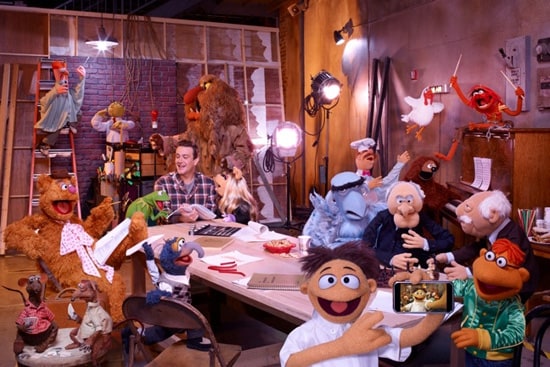