Spring is still a few months off but if you’re like me, it’s never too early to start planning for those glorious spring afternoons when you can come to Walt Disney World Resort, grab a hotdog and some peanuts and catch a big-league spring training baseball game at Champion Stadium at ESPN Wide World of Sports Complex. 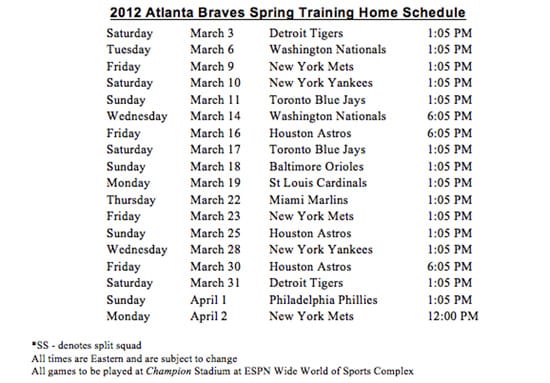 The Atlanta Braves just released their spring training schedule and I have already circled a few games on my calendar. The New York Yankees are here twice – March 10 and March 28 – and the reigning World Series champions, the St. Louis Cardinals, are here March 19. The New York Mets (March 9, March 23 and April 2) and Philadelphia Phillies (April 1) are coming, too.

In all, the Braves are playing 18 games at Disney, including three night games. They report to Disney in mid-February and then open up the spring season here against the Detroit Tigers on March 3. Individual game tickets go on sale Jan. 7 at all Ticketmaster outlets and at the sports complex box office. Get more information at espnwwos.com/atlantabraves.