The Pope House: A Piece of Disneyland History at the Circle D Corral 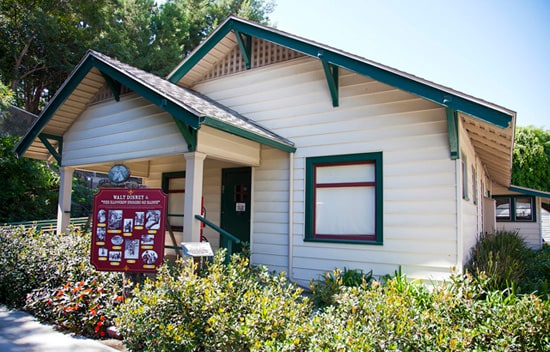 Many Disneyland park guests don’t know that just behind Big Thunder Ranch in Frontierland lies a very important piece of Disney history. The Pope House, once home to Owen and Dolly Pope, is the only house on Disneyland Resort property that remains from before the park was built.

As the original managers of the Pony Farm – now known as Circle D Corral – the Popes are key to the history of both Disneyland and Walt Disney World Resorts. In a January 25, 1980, interview with Bob Matheison, they detailed the story of how they came to be part of the creation of Disneyland. 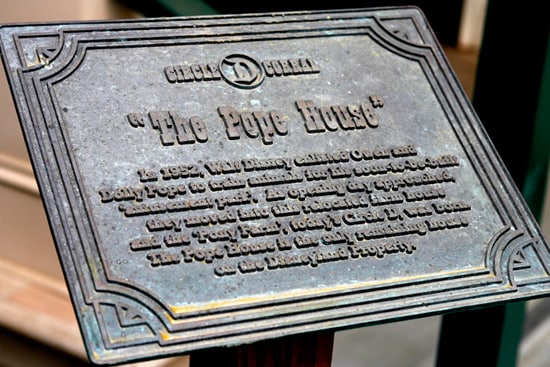 Owen met Dolly in December 1929 and they were married on July 13, 1935. Together, they showed horses at fairs throughout California – living out of their 30-foot van. In 1950, Disney Legend Harper Goff saw them showing horses at the Pan Pacific Auditorium in Los Angeles and recommended that Walt Disney see their show as well. Walt was interested in small ponies and equipment for a project he was working on (an amusement park which he planned to build adjacent to his Burbank studios). In March 1951, Walt met the Popes for lunch to talk about their ponies – which they thought he wanted for a film. It was at this lunch that he told them about his plans for building a park.

On the Sunday after Thanksgiving in 1951, they moved to the Walt Disney Studio in Burbank. Other than military personnel housed there during World War II, the Popes are the only people to have ever lived at the Studio. Owen built 10 stalls for Walt’s horses using wood from the Studio’s own lumber supply, and he and Dolly lived in a trailer at the Studio for the next 2 ½ years. During this time, Walt visited them every day to chat about horses and his plans for Disneyland, and Roy Disney also visited them to discuss what people did at fairs and which types of shows they enjoyed there. 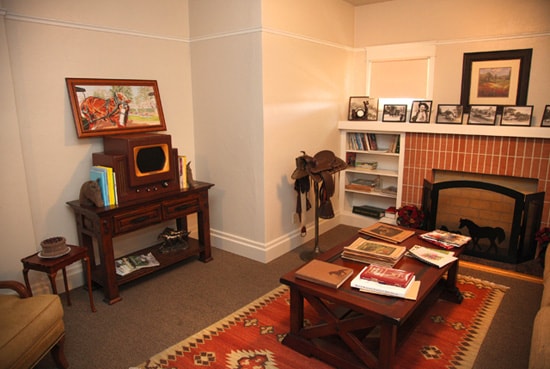 During the construction of Disneyland, when various structures were being moved from the property, Owen and Dolly were given their choice of the houses that were being moved. The house they chose was moved to the 10-acre Pony Farm, which would go on to be the Circle D Corral that we know today. The house – which the Popes moved into three days before Disneyland opened – is still at the corral today. The photo above gives you a glimpse inside the living room, as it would have appeared when Owen and Dolly lived there.

As preparations were underway for the opening of Walt Disney World Resort in Florida, Owen built the harness and riggings for the horses at the new resort from his home at Disneyland. In January 1971, he and Dolly moved to Florida, where Owen helped supervise the building of Tri-Circle-D Ranch. A few years later, in September 1975, Dolly became the first Walt Disney World Resort cast member to retire, followed by Owen in October.

Likes (9)
Share The Pope House: A Piece of Disneyland History at the Circle D Corral