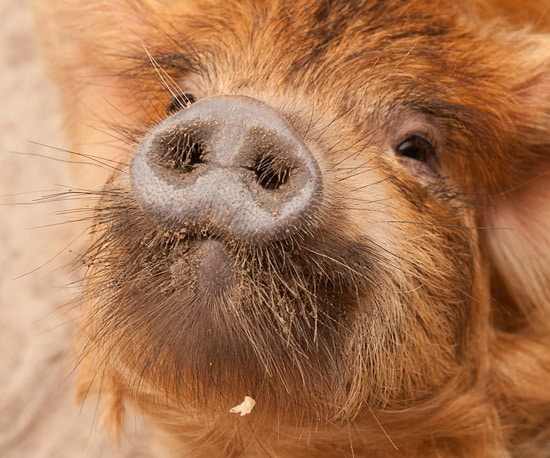 Our animal care experts love to talk about how great (smart, cute, etc.) the animals in their care are – and there’s even friendly competition among the various teams. The team at Conservation Station has something new to brag about with the arrival of three kunekune pigs, a rare breed that has just made its debut at Disney’s Animal Kingdom. 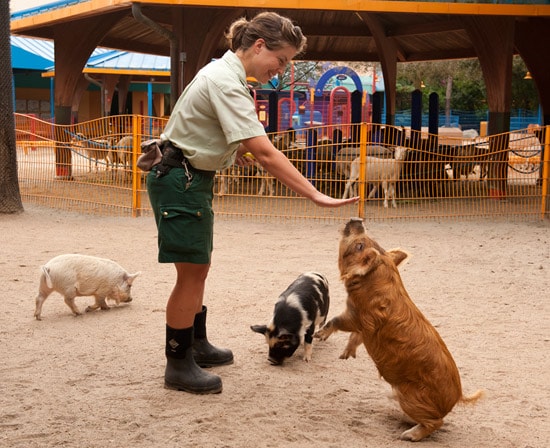 To help with the pigs’ care and to acclimate them to the up-close experience with guests at Affection Section, keepers have been training the kunekune pigs in a variety of behaviors. When Gene Duncan stopped by to take these photos, animal keeper Jennifer Le Beau had everyone smiling as they watched the pigs ham it up during their training session. Since the pigs are domestic animals—and very smart—they are trained to sit, stand, spin and even in agility, similar to what you might teach your dog. This training helps keeps the pigs fit, intellectually stimulated and comfortable around our guests.

Guests who visit Affection Section can see and learn about the kunekune pigs and the other rare domestic breeds that make their home there. Conserving rare domestic breeds is important because these breeds can have valuable characteristics such as disease resistance, extreme climate tolerance, and the ability to use poorer pastures. Valuable characteristics of the kunekune pig include their suitability for a range of climates, ease of management, and a lack of inclination to roam.

Found in New Zealand, but believed to be of Chinese descent, kunekune pigs were almost extinct by the 1980s. In 1984, a breeding program was begun with 18 pigs – most kunekunes today are descended from these animals. By 2004, it was estimated that there were 5,000 kunekune pigs in New Zealand.