This week, we introduced some new stars on the Disney Fantasy cruise ship. That’s right, the Muppets will be featured in a new adventure game, “The Case of the Stolen Show,” which takes you on an interactive quest around the ship via more than a dozen pieces of Enchanted Art and physical clues. Be sure and check our original post for some behind-the-scenes shots from filming for the game. 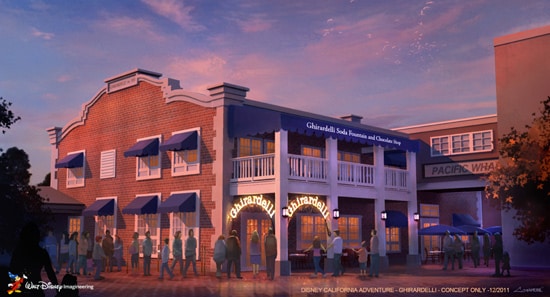 And for all of you with a sweet-tooth, we shared the exciting news that a new Ghirardelli location will open at the Pacific Wharf area inside Disney California Adventure park in late spring 2012. It’ll be similar to our soda fountain and chocolate shop at Downtown Disney in the Walt Disney World Resort featuring Ghirardelli’s world-famous hot fudge sundaes and chocolate products. We can’t wait!

A Showcase of Gifts from Around the World at Epcot – From Mexico to China and everywhere in between, we share unique gift ideas from around World Showcase at Epcot.

Vintage Walt Disney World: The Trees of Christmas Past – These aren’t your every day Christmas trees. Take a look at how Disney’s Grand Floridian Resort & Spa and Disney’s Contemporary Resort have celebrated the holidays in years past.

Mele Kaliki Tiki at Trader Sam’s Enchanted Tiki Bar at Disneyland Resort – Here’s a look at some of Sam’s new holiday surprises, including décor, music and some seasonal new drinks.