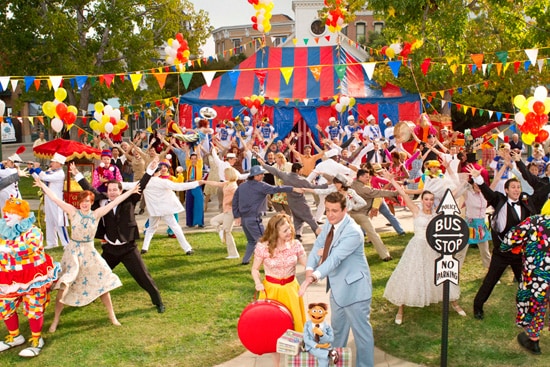 Muppet productions are known for their surprise celebrity cameos and their latest film, “The Muppets,” is definitely no exception. Among the many actors, musicians and celebrities to appear in the film, you might have noticed some familiar faces from right here at the Disneyland Resort – our own Disneyland Band!

I recently spoke with Art Dragon, Conductor, Disneyland Band, who told me how he and the band were cast in the film and what it was like filming with the Muppets. It all started when Art was chatting with a friend of his, Kevin Frawley, Vice President of Special Events at The Walt Disney Studios, about an upcoming Muppets film he was working on.

“He had this wild idea for a big scene involving a marching band,” Art recalled. That’s when Art suggested the band in the scene should be the Disneyland Band. Over the course of two days, members from the Disneyland Band – some hand-picked by Kevin himself – filmed the remarkable opening number involving dancers, singers and even Cirque du Soleil performers.

“It was a ball. It was like a circus atmosphere in that town square,” he said. “We had a good time with it.”

I asked Art whether there were any mishaps when filming such a large, choreographed scene with so many performers but he told me that the production was very smooth. He told me that the most memorable moments for him involved watching the magic made by the “Muppet Wranglers” on set.

“We were honored that we were there,” he said.