What you get: The musical score from Walt Disney’s first live-action musical (also available on DVD) starring Ray Bolger (The Wizard of Oz), Ed Wynn (Mary Poppins) and our own Queen of Walt Disney World Resort, Annette Funicello.

Why it’s cool: It’s a stereo re-creation of the score (not actually the soundtrack as stated on iTunes) with a magnificent overture by Camarata. Listen for Henry Calvin (Sgt. Garcia on Zorro), a young Ann Jillian as Bo-Peep, and a rousing rendition of “March of the Toys,” which accompanied Walt’s vision of the toy soldiers, introduced in the movie and now a Disney Parks parade tradition. 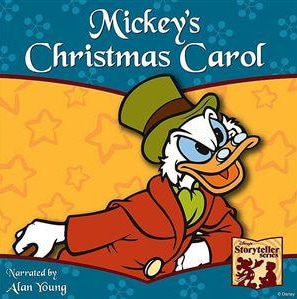 What you get: An album length adaptation of Charles Dickens’ A Christmas Carol combining soundtrack elements from the 1983 featurette with songs and dialogue from the original 1974 album – which actually inspired the film.

Why it’s cool: Film, radio and TV star Alan Young (beloved as Wilbur on TV’s “Mister Ed”) wrote and starred on the album. He’s the voice of Uncle Scrooge McDuck (also on DuckTales and in Disney Parks shows), and also voices Mickey! All the female roles are played by the great Janet Waldo, voice of Judy Jetson, Penelope Pitstop and Josie (of Josie and the Pussycats). Goofy is voiced by Walker Edmiston (Sigmund and the Sea Monsters, H.R. Pufnstuf).

Walt Disney’s Lady and the Tramp

Why it’s cool: The Christmas song, “Peace On Earth” opens and closes the Walt Disney Pictures animated classic, coming to Diamond Edition Blu-ray and DVD in February. The whole soundtrack album is available for download, as well as the 1962 song album, conducted by Camarata with top Hollywood soloists Robie Lester, Teri York, Bob Grabeau and Marilyn Hooven – who sings “Peace On Earth” in counterpoint with “Silent Night.”

The Night Before Christmas

What you get: The Clement Moore poem set to music by Hollywood vocal director Ken Darby (The Wizard of Oz, Finian’s Rainbow). Look for the versions by Fred Waring and His Pennsylvanians or The Harry Simeone Chorale.

Why it’s cool: You may remember this version from the Disney Parks stage show, “Mickey’s ‘Twas the Night Before Christmas.” It was introduced on the 1940’s radio sitcom, Fibber McGee and Molly and animated for TV in 1968.

These songs and albums are available for download on selected websites including iTunes and amazon.