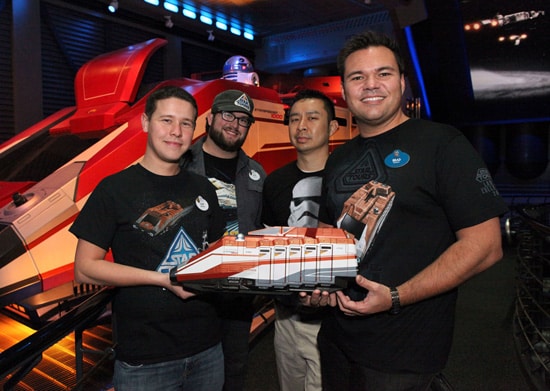 I recall the day in early February 2011 when I first saw an unpainted sample of the new Starspeeder 1000 vehicle playset. I felt like I was six years old wishing for the newest Star Wars toy from Santa Claus. Now with the holidays around the corner, my wish is coming true. I recently visited Star Tours – The Adventures Continue with product developers Cody Hampton and Brad Schoeneberg, and artists Quynh Kimball and John Henselmeier to discuss the creation of this toy arriving in mid-December. 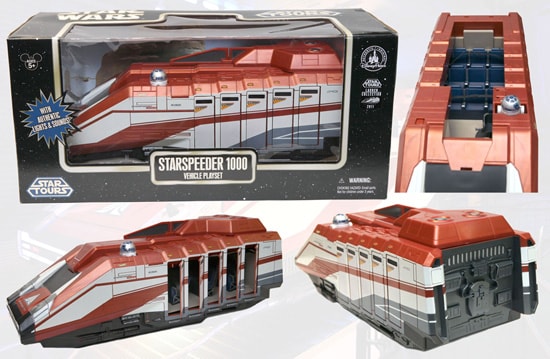 “The Starspeeder has been one of the most requested toys,” explained Cody. “With the launch of Star Tours – The Adventures Continue, we knew it was a perfect time for [the toy]. We worked closely with Tom Fitzgerald and many wonderful partners at Walt Disney Imagineering to make this vehicle as authentic as possible.”

The vehicle measures approximately 19 inches long, 7 inches wide and 7 inches tall. The details are most impressive; it is like the Starspeeder 1000 has been miniaturized!

“We made a few modifications to the seating,” continued Cody. “Unlike the attraction vehicle which can hold 40 passengers, this toy holds nine action figures and a pilot. It also comes with R2-D2 and the IC-360 camera droid. The R2 unit is removable and can be replaced with a different Astromech droid.” 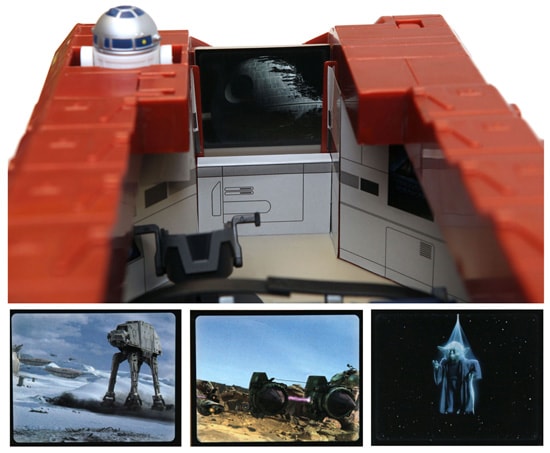 The action figures introduced earlier this year complement the vehicle nicely (not that I have played with them of course). One cool feature is the interchangeable destination disks which picture four different scenes. When placed in the front screen of the vehicle, you can hear dialogue from the attraction.

“We used dialogue and sound effects directly from the attraction,” explained Brad. “Sounds are activated by inserting the destination disks, pressing R2-D2 or pushing buttons on the back of the vehicle. One sound we love is the boarding chimes that play when the doors are opened or closed.” 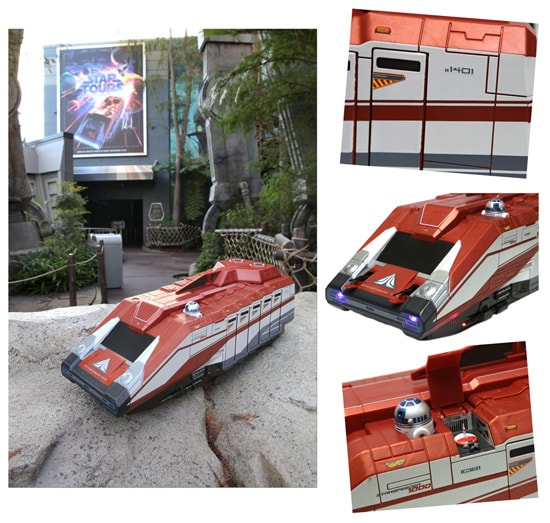 The vehicle also lights up and the Starspeeder’s laser cannons pop out of the front.

The Starspeeder 1000 vehicle playset will have a retail of $54.95 and will only be sold at Disney Parks including The Star Trader at Disneyland Resort, Tatooine Traders at Disney’s Hollywood Studios and Once Upon a Toy at Downtown Disney Marketplace. Unfortunately, this playset will not be available via the Disney Parks online store.
I think I know what I am, I mean, my son is getting this holiday.