TUBACHRISTMAS Coming to Downtown Disney District at the Disneyland Resort 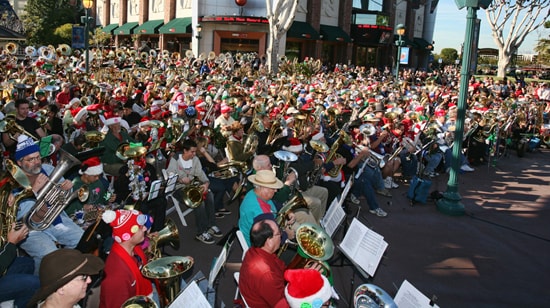 Calling all tuba and euphonium players! On Wednesday, Dec. 21, TUBACHRISTMAS will be attempting to set another world record at Downtown Disney District at the Disneyland Resort, and they need your help.

For the past six years, Downtown Disney District has hosted this unique event, in which hundreds of tuba and euphonium players gather to perform holiday music arranged specifically for these instruments. A global phenomenon, the event is held in various locations around the world, including the Kennedy Center, Rockefeller Center, and locations in Canada, Costa Rica and Switzerland. The Disneyland group set the world record just a few years ago for the most tuba players ever participating in this world-wide tradition and is aiming to break the record again this year.

All ages and skill levels are invited to attend – this year, the youngest tuba player will be 8 years old and the oldest will be 82 years old. Event producer and Disneyland Resort Talent Booking and Casting Director, Stan Freese (who has been participating in TUBACHRISTMAS since 1983), says he is drawn to the event for its uniqueness.

“It’s fun, it’s free, and you won’t see something like this in just any shopping mall,” he says. Be sure to keep an eye out for Stan, who will even be playing a solo in the group’s performance of “Silent Night.”

Here are the event details:

And even if you’re not a tuba player, come out and watch this spectacular performance!