Wildlife Wednesdays: Ostriches and Ornaments (What Do They Have in Common?) at Disney’s Animal Kingdom Lodge

Start talking about holiday ornaments, and there’s probably very little chance that the conversation will lead to ostriches, except at Disney’s Animal Kingdom Lodge. That’s because at the resort each holiday season, guests get to make fun holiday ornaments using real ostrich eggs. 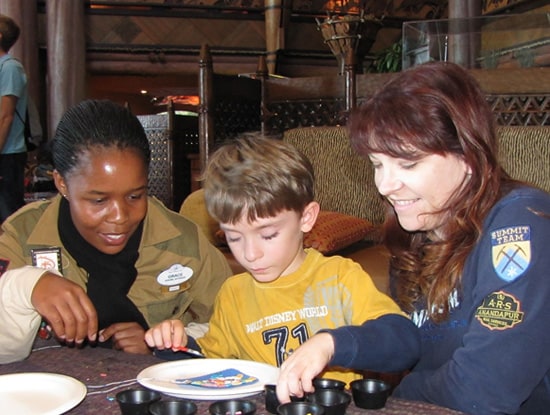 With help from the Disney’s Animal Kingdom Lodge Savanna Guides, families and children use colorfully dyed ostrich egg pieces – from eggs laid by the resort’s and Disney’s Animal Kingdom ostriches – to create holiday ornaments that they can take home, creating life-long memories of the wildlife they’ve seen and learned about during their visit.

Each day, guests can choose from a variety of African animal- and culture-inspired designs to use when decorating their ornaments. A special design also is available each day that represents one of the many organizations supported by the Disney Worldwide Conservation Fund (DWCF). For example, this Thursday, guests can decorate a zebra ornament while learning about a DWCF-supported zebra conservation project by the Grevy’s Zebra Trust. Community involvement is a critical aspect of successful conservation efforts, and the Grevy’s Zebra Community Conservation project, which is helping to protect the endangered Grevy’s zebra, includes education programs for members of the local community in northern Kenya. Since 2000, DWCF has given nearly $160,000 to support zebra conservation efforts alone!

Guests who participate in the Disney’s Animal Kingdom Lodge ornament activity are encouraged to make a donation to help wildlife and nature, 100% of which goes to DWCF. Guests have contributed over $58,000 to DWCF since the activity began in 2003! Since 1995, DWCF has awarded nearly $18 million to support conservation programs in 111 countries. For a complete list of recipients and to view The Walt Disney Company’s most recent Conservation Report, visit www.disney.com/conservation. If you’re visiting Disney’s Animal Kingdom Lodge this holiday season, you are welcome to decorate an ornament of your own – and help wildlife and nature – now through Dec. 31 from 2:30 p.m. – 5:30 p.m. at either the Jambo House lobby or the Kidani Village library.

Likes (0)
Share Wildlife Wednesdays: Ostriches and Ornaments (What Do They Have in Common?) at Disney’s Animal Kingdom Lodge