Some kids take offense at being called goofy. Bill Farmer took it as professional advice.

Born with the gift of comedic gab, Bill has turned his ability to channel stars both real and imagined into an illustrious show-business career involving a colorful array of animated characters. None are nearer or dearer to his heart than Goofy, the iconic character to whom Bill has lent his voice for decades.

As this week marks the milestone 25th anniversary of Bill’s career going Goofy, I sat down with the Disney Legend for an interview that’ll appear in a special Goofy-tribute issue of Disney Files Magazine scheduled to begin mailing to Disney Vacation Club members next month. 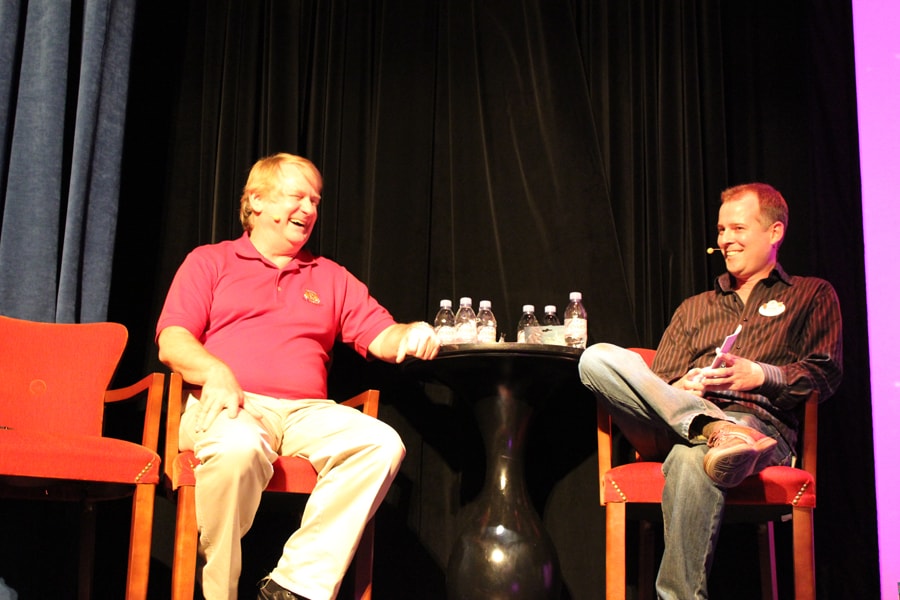 Here are three of my favorite Bill quotes from our visit:

On his skeptical father-in-law finally respecting Bill’s decision to quit his “real job” to focus on a career in comedy: “Well, fast forward a few years [after landing the Goofy gig], as I’m getting him backstage access to Walt Disney World Resort attractions and inviting him to private parties with celebrities, and the tide definitely turned. I’ll never forget going with him to an event at his church in Melbourne, Fla., and having him introduce me to his friends. Here’s exactly what he said: ‘I’d like you to meet my son-in-law, Bill…and his wife, Jennifer.’ I had arrived!”

On being Goofy at home: “One story that’s quintessentially Goofy unfolded when I was outside our house hanging Christmas lights. To set the scene, you had me, a bunch of tangled lights, a ladder and a pair of thorny rose bushes. Perfect setup for a Goofy moment, and you can probably see where this is going. But I didn’t just slip and fall into a rose bush. That would be too easy. I managed to snag my sweatpants on the first rose bush and fall bare-butted into the second. That, my friend, is taking your work home with you.”

On his favorite film project: “Of all the great projects I’ve been fortunate enough to take on in my career, “A Goofy Movie” has been my absolute favorite… The movie wasn’t just about Goofy’s goofiness. It was about a father struggling to connect with a son who wasn’t so little anymore. I remember taking my son, Austin, to an advance screening of the film for Disney executives in Walt’s old screening room on the lot in Burbank. Austin was pretty little at the time, and he seemed to be a bit shaken as we left the theater. I said, ‘What’s wrong, buddy?’ And he answered, ‘When you and Max were about to go over the waterfall, I thought you were going to die.’ So either we’d created a film of such emotional depth that even my own son had suspended disbelief, or my kid just couldn’t tell the difference between Dad and Goofy.” On behalf of all Disney fans, Disney Vacation Club congratulates Bill on 25 years of the goofiest career in Hollywood.